The spiritual successor to the iPod Shuffle: a Mighty Spotify player 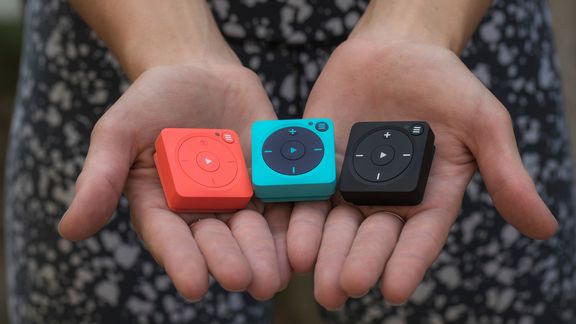 Remember the iPod Shuffle? The small, pocket-sized gadget came in a number of colors and played downloaded songs in random succession. The mini music player was hugely popular, selling 10 million units in its first year and going through four generations of fine-tuning by Apple before it was discontinued last year. While the Shuffle’s days are over—for now—its spirit lives on in the Mighty Vibe, a pocket-sized music machine that links directly to Spotify.

The original Mighty music player was Kickstarter funded and debuted last year, partnering with Spotify so that users could download playlists onto the audio player and listen to music even without an internet connection. This is done through a companion app that syncs music from Spotify to the Mighty through Bluetooth or WiFi. “In other words,” Billy Steele of Engadget writes, “it brought a tiny music player to the streaming generation.”

The Mighty Vibe, released today (Oct. 16), is the player’s second edition. Available in three colors and retailing at $85.99, the Mighty Vibe now has an improved Bluetooth range, longer battery life, and is sweat and water resistant. Mighty is also working on a new version of the companion app with a redesigned interface to make syncing content more seamless.

Like the small and convenient iPod Shuffle, the sleek Mighty Vibe is ideal for listening to music and easy to carry when active, unlike some cumbersome smartphones, which can be a challenge for some to even hold.

In an age when mobile devices seem to be getting bigger, more expensive, more super-powered (and maybe less worth it), it’s no wonder that some tech companies are trying a different-yet-familiar tune. Brands are increasingly marketing minimalist phones and devices, hoping to capitalize on people’s frustration with smartphone dependency. The Palm brand, associated with the iconic Palm Pilot of the ‘90s, just returned via a new startup that bought the right to the Palm name, attaching it to a new credit-card sized phone with limited functions. The Mighty Vibe also seems like an homage to tinier, easier times—barring its link to today’s massive streaming music industry.

The impact of streaming’s popularity has been widespread, from altering the ideal length of a song to raising concerns from music chart purveyors on how to rank artists. With the Mighty Vibe, an iPod Shuffle for the streaming generation, that impact has now found its way to people’s pockets.