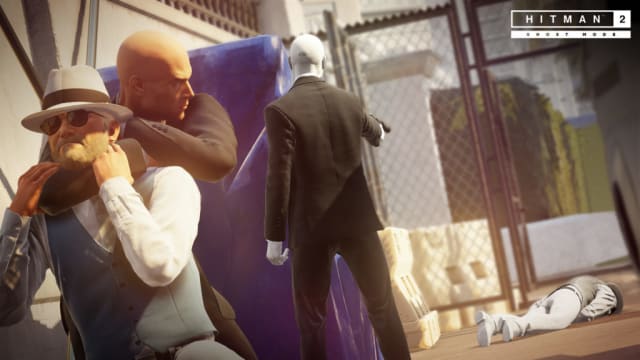 The surefire way to tell identical twins apart is to check their fingerprints and the barcodes on the back of their heads. Developer IO Interactive has released a trailer for Ghost Mode, a new addition to the upcoming Hitman 2, that brings competitive multiplayer to the series for the first time. It's a 1v1 online mode that pits you against an opponent to see who can eliminate their target as quickly and cleanly as possible.

Each Agent 47's goal is to earn five points before the other, with each kill awarding a single point. Earning a point means killing the target unnoticed and hiding the body without it being immediately found. Players will lose points by eliminating innocent NPCs. There will also be pick-ups throughout, with disguises, weapons, and "Ghost Crates." Players that find a Ghost Crate can only take one item, and that item will be removed as a choice for their opponent.

You won't be trying to kill your doppelganger, not even with a pair of scissors or a fish. Each player will be in their own "reality," where they can see a ghost Agent 47, including what they're wearing and what they're holding. It will, however, be possible to throw your opponent off balance by using a Ghost Coin, kind of an interdimensional totem, which when thrown in your reality to attract the attention of an NPC, will do the same in their reality.