Cheap, Unloved, and Blasting Higher in 2018

This post Cheap, Unloved, and Blasting Higher in 2018 appeared first on Daily Reckoning.

The Nasdaq gained more than 28%, with household name tech stocks like Facebook, Netflix, and Amazon leading the way higher. Each of these plays boasts 2017 gains of more than 50%.

But the cryptocurrency space tops them all. Bitcoin launched to ridiculous 12-month gains of more than 1,300% — even after retreating more than $5,000 from its December peak.

There was no shortage of opportunities for investors in 2017. Historically low volatility provided excellent profit chances for traders and investors alike. It was downright impossible to lose money in 2017. Unless you bet big on commodities…

Thanks to a first half swoon, the Bloomberg Commodity Index went nowhere in 2017. Gold and oil both underperformed the major averages. Stocks and sectors with exposure to these commodities were dead money walking for most of the year.

But the market is quickly shifting to begin 2018 trading.

Energy stocks rallied off their lows during the third and fourth quarters. Metals and mining stocks are also blasting higher. Heck, we even saw a bounce in gold to cap the final trading weeks of the year… 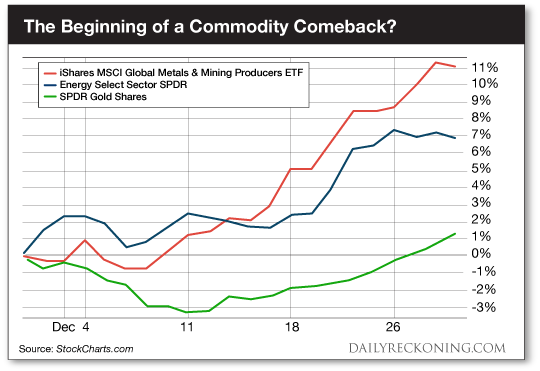 Bottom line: we’re starting to see rumblings of a major turning point in commodities. In fact, this forgotten trade could turn into one of the biggest comeback moves of 2018.

No one in their right mind is paying any attention to commodities right now. Why should they? After all, we haven’t seen a sustained rally throughout the commodity space in a long time. The Reuters-Jefferies CRB Index officially topped out in late 2008. Even after its recent rally, the commodity index isn’t far from its 2001 lows. That sets up a compelling trading opportunity for anyone looking for value in this red-hot market.

Fact is, commodities are cheap compared to stocks. Historically cheap. The CRB’s performance compared to the S&P 500 has spiraled lower over the past five years as stocks have rallied. The CRB – S&P 500 ratio is now at its lowest level since the CRB Index was created in 1957, John Murphy notes on his blog at Stockcharts.com.

Commodities have become the most unloved trade on the market. Now that the group is finally bouncing off extreme levels, some of the smartest market minds in the world are taking notice.

“You go into these massive cycles,” DoubleLine CEO Jeffrey Gundlach tells CNBC. “The repetition of this is almost eerie. And so if you look at that chart the value in commodities is, historically, exactly where you want it to be a buy.”

Economic catalysts are also bolstering the value argument for commodities. An uptick in global growth is boosting copper, Bloomberg notes, while increased demand for electric vehicles is a positive for the price of nickel. Executive orders signed by Trump could also lead to more mining activity in the U.S. Sprinkle in a weakening dollar and you have the fundamental pressure the commodity market needs to see to sustain a successful rally.

FCX posted gains of more than 36% in December alone, capping a six-month comeback move of more than 56%. If we turn to the charts, it’s easy to see copper’s impressive turnaround. After years of pain and suffering, a sustainable rally is in the works. 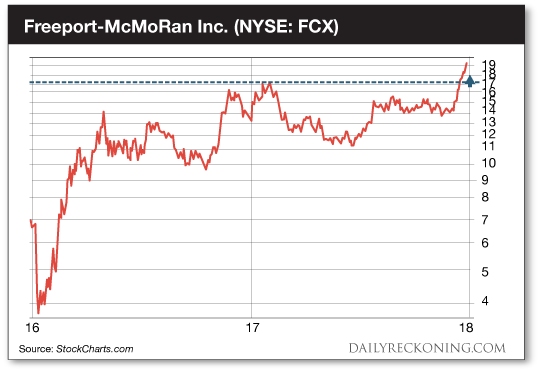 FCX first ripped off its 2017 lows right after reporting second-quarter profits back over the summer. The company didn’t even beat earnings expectations, but solid revenue and upbeat guidance was enough to spike the stock. It’s certainly come a long way since bottoming out in early 2016. Now its sitting at prices we haven’t seen since 2015.

When we last updated you on FCX in early December, its share price had gained more than $2 over just six trading sessions. Freeport has now broken out to new two-year highs and appears primed and ready to make a legitimate run above $20. If momentum traders continue to pile into unloved materials and mining stocks like this one, we could be in for a wild ride.

Greg Guenthner
for The Daily Reckoning

The post Cheap, Unloved, and Blasting Higher in 2018 appeared first on Daily Reckoning.