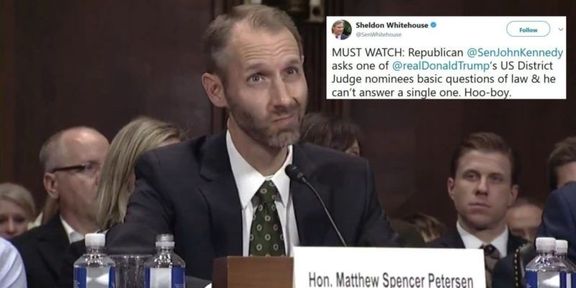 Some of the federal court judicial nominees put forth by the Donald Trump administration have been criticized for their complete lack of experience and for their controversial views. But a clip released Thursday night gave even more ammunition to those who can’t believe the poor quality of some candidates.

The furor (and laughter) increased exponentially when Sen. Sheldon Whitehouse (D-R.I.) tweeted the five-minute interview between Sen. John Kennedy (R-La.) and Matthew Petersen, a Trump nominee for the U.S. District Court for the District of Columbia.

It did not go well for Petersen, who couldn’t answer anything Kennedy asked him. And remember, Kennedy is a Republican who theoretically would like to approve as many GOP judicial nominees as he could.

MUST WATCH: Republican @SenJohnKennedy asks one of @realDonaldTrump’s US District Judge nominees basic questions of law & he can’t answer a single one. Hoo-boy. pic.twitter.com/fphQx2o1rc

In response, legal observers tweeted their amazement at the clip.

Put ideology aside. Would you want your fate in the hands of a judge who doesn't know basic trial rules and procedure? https://t.co/B9MPk6TTnu

When you're stumped by Senator John Kennedy, it's probably time to explore alternate career options. https://t.co/rqLWlFcXQW

This is the definition of a nightmare Senate confirmation hearing: Trump judicial nominee fumbles basic questions about the law https://t.co/t3YLGglJ5u

I dunno—maybe I’m an elitist, but asking a judicial nominee what a “motion in limine” is seems okay. Can we ask Federal Reserve nominees what “inflation” is, or is that too weird? https://t.co/IhzFDuwnWC

Christo, Artist Who Wrapped and Festooned on an Epic Scale, Dies at 84