This post Baptism By Fire appeared first on Daily Reckoning.

There’s a crisis brewing for the U.S. Air Force.

One that affects the majority of combat pilots, and may risk the safety and freedom of Americans.

The crisis stems from a lack of real-world combat experience. 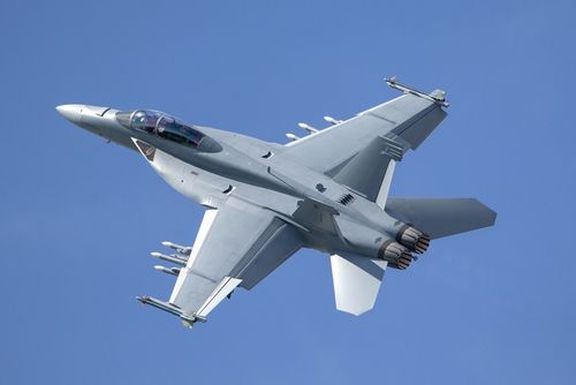 Sure, the U.S. has technically been at war for the majority of the last two decades. And this is a very real war with casualties, heartbreak and sacrifice.

But the brave men and women serving as combat pilots have had to contend with a low number of flight hours, and few real-world combat situations.

According to Defense One, even pilots who fly active missions over Iraq, Afghanistan or Syria spend most of their time in holding patterns, loitering over low-threat environments. And a steady diet of low-threat missions leads to a crisis of inexperience.1

I’ve always been a bit of an aviation buff. But as I read this account of the current United States Air Force, I was struck with the similarities to today’s investment market…

The Value of High-Risk Experience

I got my first real-world experience as an investor when I took a job as a hedge fund research analyst. The year was 2000, and my boss often told me that I was getting a “baptism by fire.”

He said that because the first major investment decisions I ever made came during some of the most harrowing market environments he had ever seen. This was the dot com bubble — or more accurately, the explosion of the dot com bubble.

While some of my friends told me it was bad luck to start out in the investment business during a scary bear market period, I knew better.

By cutting my teeth during a time when speculative stocks were trading sharply lower, I instantly learned the value of protecting my clients’ capital, and not taking on too much risk.

Those lessons came in handy during the financial crisis of 2008, and continue to be important concepts that I carry with me to this day.

The key to protecting your capital is grounded in knowing what can happen, and being vigilant to watch for signs of danger.

Why do I bring this issue of risk up today?

Because unfortunately, our U.S. investment market is full of inexperienced fighter pilots who don’t know how to respond to real-world risk.

Lulled to Sleep By A Peaceful Market

It’s been a quiet year for U.S. stock market investors. Too quiet…

I was shocked this week when I stumbled upon a chart measuring pullbacks in the market. According to the graphic, the S&P 500 has not experienced a single day in 2017 in which the market was more than 3% off its high.

Not a single day! 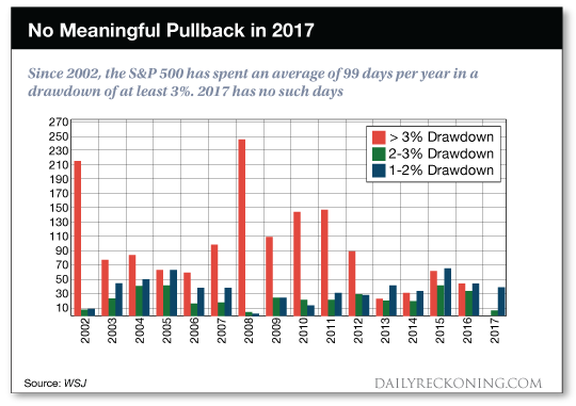 I literally had to go back to my long-term S&P 500 chart and check out the data for myself.

Sure enough, the market has not backed off 3% at all during the past year. And to add to that bullish narrative, it looks like this will be the first year ever in which all 12 months featured a stock market advance.

While that sounds like a great environment, experienced investors know enough to cringe.

That’s because when markets become this lopsided, human tendency is to overlook risk. Our brains are hardwired to expect more of what fills our recent memory. And that means investors are positioned to take advantage of a market drifting steadily higher.

The problem is that when the market inevitably starts to turn lower, the majority of investors will have too much capital invested in speculative stocks. After all, these are the companies that have been giving investors the best returns over the last few years.

As markets fall and losses accumulate, investor panic will likely set in. And if you’ve got too much capital in risky stocks, you’ll likely lose much more than you can afford to.

Protecting Your Capital Before It’s Too Late

I don’t want to sound an alarm unnecessarily. And I don’t think you need to sell everything just because the market has been moving higher for an extended period.

But I do think it is important for you to have a solid plan for protecting your wealth.

That’s why I’ve been talking so much about having a balanced approach to managing your investments.

Specifically, you should focus on companies that are actually earning profits, and have strong business models that can survive ups and downs in an economy. Speculative growth stocks are fine for a small portion of your capital, but they shouldn’t represent the majority of your positions.

And it’s important to have money parked outside of the stock market. In things like precious metals, some corporate bonds, and maybe even real estate. By spreading your money into different baskets, you’re less likely to get hurt by a market pullback.

Unfortunately, most investors won’t follow these common sense guidelines. Which means they’ll win big during bull market environments, but they’ll give it all back when the going gets tough.

So take it from this pilot with some seat time under his belt. Make sure you’re not acting like an inexperienced pilot when the market battle starts.

And when the dust settles, you’ll have your wealth intact with plenty of opportunities to invest in low-priced stocks that have been sold by traditional investors with no experience.

Here’s to growing and protecting your wealth!

The post Baptism By Fire appeared first on Daily Reckoning.