What is wrong with Star Wars: Battlefront II? GamesBeat Decides 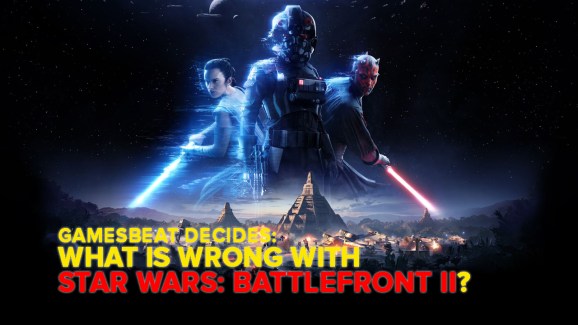 Star Wars: Battlefront II comes out this week and a lot of people are already playing it and yelling about it on the internet. Numerous fans don’t like its business model and progression system, and they are letting publisher Electronic Arts know it. On the GamesBeat Decides podcast, host Jeffrey Grubb and Mike Minotti got together with guest Bob Gardner from Intel to talk about Battlefront II, EA, and the most downvoted comment in the history of Reddit.

In addition to EA, we ask what in the world makes Nintendo think it will sell 25-to-30 million Switch systems next year. The only possible answer is Pokémon … or China? Who knows, but that’s a big number. The Decides crew also sorted themselves into Hogwarts houses after hearing the news that Pokémon Go developer Niantic is taking that license on next. We also dive into some tidbits about new Hitman, GameStop’s Xbox One X sales, and the sexiest phrase in the English language: “recurrent consumer spending.”

Here are the games we talk about this episode: