Mercedes-Benz VISION EQS Speeds Toward the Future of Luxury

With a sweeping silhouette reminiscent of an Anish Kapoor sculpture, the Mercedes-Benz VISION EQS seems to stretch in both directions even while parked, a sinew of aerodynamics capturing and contouring light forward and back. Parked at a precipice overlooking the Los Angeles skyline, we’ve been invited by Gorden Wagener, Chief Design Office Daimler AG to learn about the future of luxury as envisioned by the German luxury automaker.

“We wanted to create something uniquely different looking, very futuristic. Something almost like an ambassador from the far distant future,” explains Wagener during a walk-around introduction to the two-tone concept.

While the VISION EQS’s personality is most definitely “futuristic”, a certain amount of restraint is on display for a concept vehicle imagined as a predictor of the generational (r)evolution predicated upon the electrification of automobiles (especially in comparison to the biomorphic weirdness of the Avatar-inspired VISION AVTR, the manifestation of imagination completely unleashed). Wagener cites the Bauhaus and the Teutonic design tradition as guiding principles to the “purity” of function and form, but notes the enhancements delivered with the promise of technologies and sustainable architecture on the horizon.

Details like an enormous illuminated grill, 360-degree continuous glowing blue lightband wrapping around the vehicle, and a few strategic pieces of bronze trim spill into the extraneous tropes of futurism, but overall the design showcases a disciplined simplicity emphasizing proportion rather than any accoutrements representing the future.

“Design starts with proportion. And almost 70% of this design’s success can be attributed to an attention to the proportions,” explains Wagener while discuss the philosophical underpinnings of the VISION EQS design before permitting a moment inside its tinted cabin.

Driver and passenger are offered their own distinct spaces within the floor-mounted battery EV platform powering the 469 hp electric motor, good for 0-60 mph acceleration in under 4.5 seconds. \\\ Photo: Gregory Han

As beastly capable as the VISION EQS may reveal itself to be when pushed, its performance is tastefully camouflaged by a mostly monochromatic layout befitting of a luxury sedan. An abbreviated steering wheel tops the cabin’s sweeping dash design, one embellished with the same glowing blue detailing as the exterior and complemented by perpendicular shadows cast from overhead. 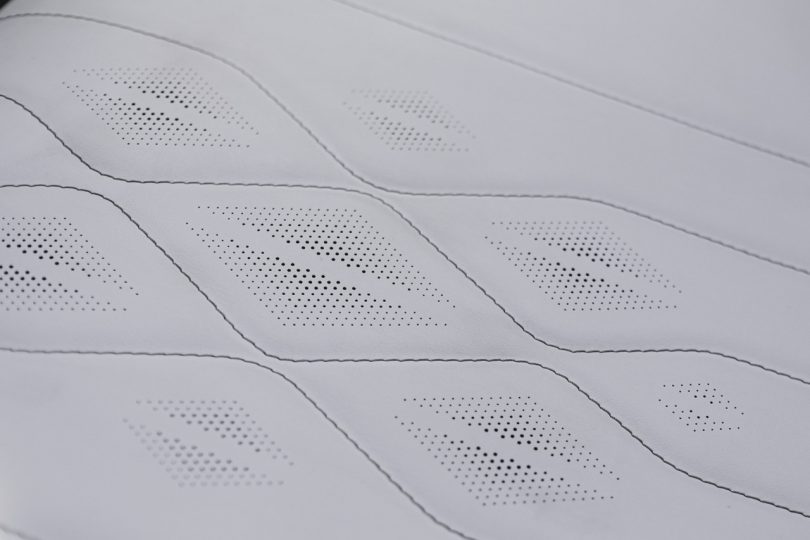 The rear is perforated and accentuated by 229 illuminated three-pointed stars. \\\ Photo: Gregory Han

The future of vehicles is veering toward the autonomous, and the VISION EQS is equipped to deliver some of that experience with an SAE Level 3 self-driving system permitting the vehicle some control on its own, but always requiring the driver’s attention. When prodded about the promised future of autonomous vehicles populating the streets in the near future, Wagener’s optimistic demeanor dims for a moment.

“It’s [autonomous vehicles] technically more difficult than all OEMs first thought. We’ll get there, but it’s complicated, so it’s not going to be as fast as some people might think. There are also a lot of challenges to solve, just think about legislation and regulation worldwide. But we are moving toward the car evolving from a mode of transportation to the ultimate mobile device.”

The whole world is designed a little better these days. Designers have more influence today, envisioning solutions beyond just functionality and technology. But the future requires vision beyond what’s been already done. That’s the cool thing about the future: it’s what we make of it.

We got a firsthand look at both the VISION EQS and the camouflaged Mercedes-Benz EQS EV. \\\ Photo: Mercedes-Benz