Samsung, LG Could Be Making Portable Monitors For Smartphones 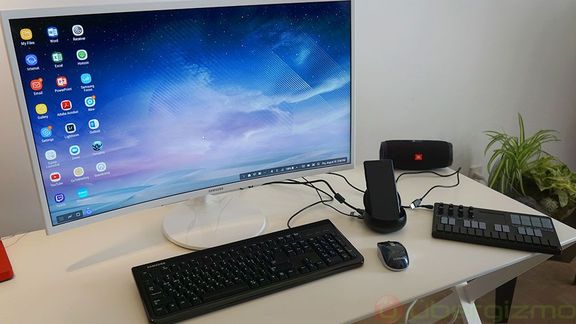 The size of our smartphone displays have come a very long way since back in the day. However, we imagine that there probably still several instances where we wished we had a bigger screen. Now according to a report out of Korea, it seems that both Samsung and LG could be working on a solution.

This is said to come in the form of portable displays which would allow users to connect their smartphones to in the event they need a larger screen. This could be useful for photo or video editing, or if you needed to make a presentation on the go. Samsung’s display is rumored to be called the DeXbook and will sport a 14.1-inch display and a 10,000mAh battery.

LG’s answer will be the Cloud Top which will also feature a 14.1-inch display but will come with a smaller 5,000mAh battery. It should be noted that both Samsung and LG have offered up software features in the past (such as Samsung’s DeX Mode) that allows users to give their smartphones a desktop experience when connected to a display, so this seems like a natural evolution of that.

However, we’re not sure where the appeal lies in carrying around an external display versus a tablet, especially if the rumors are accurate about the display essentially being just a display and where users will still need to connect their own peripherals. Either way, take it with a grain of salt for now, but with MWC 2020 now being cancelled, it is possible that perhaps we could have learnt more about those devices then.