The economic slowdown in India means hardship for Indians. Scroll.in has reported on dropping incomes as well as tight-fisted spending, even on essentials such as food.

However, it is not only Indians who are suffering—the Indian government is too. Even as the Indian government’s economic mismanagement is responsible for much of the slowdown, it has itself fallen victim to these blunders. The main casualty: tax revenue.

Given that taxation is a core part of its capabilities of any government, this is a troubling sign for India. This is doubly worrying for a poor country such as India, where state spending is key to lifting people out of poverty.

India has a long-standing problem of not collecting enough taxes given the size of its gross domestic product. Not only is it much lower than developed countries with comparable GDP sizes, it is below even comparable developing countries. India’s tax-to-GDP ration lags behind even Nepal.

What is even more troubling is that there has been little growth in this figure since independence. In the first six decades since 1950, India’s total tax (both union and states) to GDP ratio went up by only 6 percentage points. Even high economic growth since the early 1990s has done little to remedy this situation. The union government’s tax-to-GDP ratio in 1991-92, the year the Narasimha Rao government rolled out wide-ranging reforms, was 10%. Nearly three decades later, in 2018-19, the figure had inched up to 10.9%.

Moreover, taxation has seen a particularly troubled phase over the past two years, as drastic measures taken by the Modi government, such as demonetisation and the new goods and services tax (GST) ended up heralding an economic slowdown. The union government’s gross tax revenue (before giving out the states’ share) dropped from 11.2% in 2016-17 to 10.9% in 2018-19. 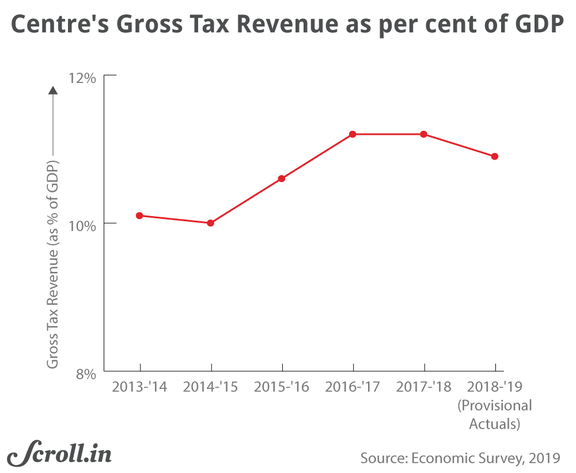 To add to this, India has a very small direct tax base (direct taxes deal with the taxation of income). Most of its taxes are indirect, that is, they are levied on goods and services. As per an analysis in the Economic Survey, 2015-16, the number of Indian voters who pay income tax should be 23%. But the actual figure is only 4%.

This gap reflects the peculiar nature of the Indian economy. Uniquely for an economy of its size, India is not an industrialised country. As a result, the economists Thomas Piketty and Nancy Qian write, “The proportion of formal wage earners in the labour force is ridiculously low.” Piketty and Qian compared India and China and found that while till 1993, India had a larger proportion of taxpayers, China shot ahead after this while India’s number has stagnated. This even though income tax is much older in India, having been instituted by the British Raj in 1922 while China’s dated from the 1980s.

The slowdown has made things worse. Direct tax growth (which includes personal income tax as well as corporate income tax), grew by only 5.2% in the first half of 2019-20, against a projected growth rate of 18.6% as set out in the previous budget.

Given India’s small income tax base, indirect taxes contribute to India’s lion’s share of the revenue. Indirect taxes in India are nearly double that of direct taxes.

Troubling, however, India’s indirect tax collections have seen some rough times after a new tax regime, the goods and services tax was introduced by the Modi government in 2017. 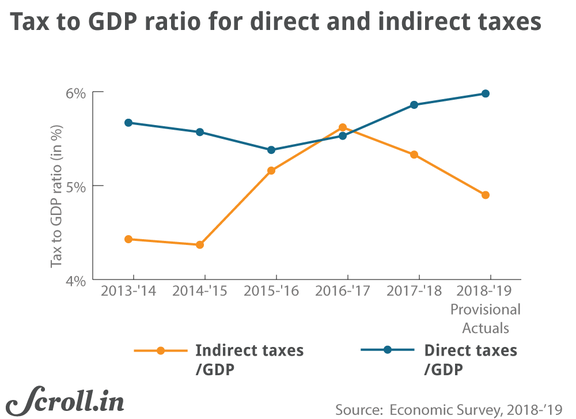 The reason was that the next GST was finding it difficult to match up to the old indirect tax system. 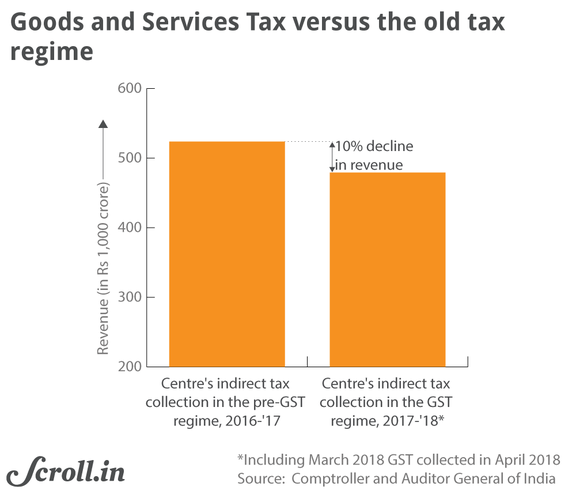 For the year 2017-18, the centre’s GST collection was 10% less than the pre-GST indirect tax collection for 2016-17. While the GST had been introduced by arguing that the old tax regime was inefficient, it is ironically performing worse than it.

That GST collection is actually falling, even as they never matched targets, has led to alarm. On Oct. 10, the union government constituted a committee to look into falling GST revenues.

Falling tax revenues has had a number of repercussions.

For one, the Modi government is squeezing the states. As per data from ICRA, taxes devolved to the states contracted by 3.4% to Rs3.1 lakh crore in the first half of 2019-20 from Rs3.2 lakh crore in the first half of 2018-19. Last week, five states West Bengal, Kerala, Delhi, Rajasthan, and Punjab complained in a joint statement that the union government was withholding substantial amounts of GST-related dues over the past three months. “Result (of withholding GST due) will be a recession,” said Kerala finance minister Thomas Isaac on Nov. 23.

Some of these changes are structural, with a penny-pinching union government depending increasingly on cesses and surcharges—taxes that it does not have to share with the states. The Reserve Bank of India’s State Finances: A Study of Budgets of 2019-20 identified that share of cesses and surcharges in the union government’s gross tax revenue has shot up in the Modi years from 9.3% in 2014-15 to 15% in the 2019-20 budget estimate.

The Modi government is also focussing on the point of collection, with the pressure on tax officials to meet targets so high that there has been a spate of resignations over the past year, according to the Income Tax Gazetted Officers Association. On the other side, big business has often complained of tax harassment. In July, the founder of coffee chain Café Coffee Day committed suicide in July, with his suicide note blaming “harassment” by income tax authorities.

Squeezed by these pressures, the income tax department in November sought a massive Rs1 lakh crore cut in direct tax collection targets for 2019-20.

Plummeting tax collection has meant the government has desperately looked to other ways to raise money. The Union government non-tax revenue shot up by 91.8% year-on-year in the first half of 2019-20 with most of this driven by a Rs1.76 lakh crore transfer from the Reserve Bank of India. The government has also announced it would sell Air India and the Bharat Petroleum Corporation by March 2020.

To keep the deficit—the gap between expenditure and revenue—in check, the Modi government has raided the coffers of public sector units, a practice repeatedly flagged by the comptroller and auditor general of India. This has called into question the government’s claim that it met its fiscal deficit targets under the fiscal responsibility and budget management act. The comptroller and auditor general has claimed that the real deficit in 2017-18 was actually 5.85% as against the government’s claim of 3.46%.

This post first appeared on Scroll.in. We welcome your comments at ideas.india@qz.com.