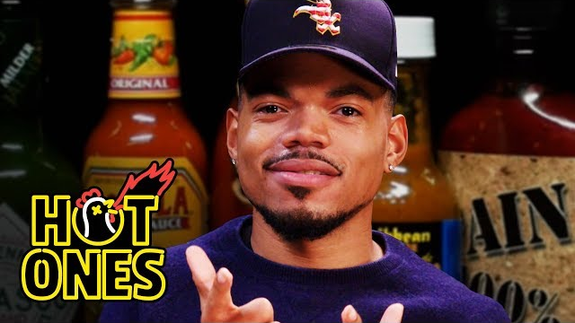 Grammy-winning artist Chance the Rapper took the Hot Ones challenge this week, munching on an array of increasingly spicy hot wings while fielding questions from host Sean Evans.

The two talked Chance's Netflix competition series Rhythm + Flow, baseball, and being a fan of your own work.

The rapper had a hard time coping with the spice, visibly struggling only about halfway through when he almost drained his glass of milk and then took Evans' without a second thought.

"I'm a real fuckin' man, but that shit is insane," he said to Evans. "Gimme your milk."

After draining the milk, Chance moved on the ice cream he had brought in himself, which appeared to do little to stop the sweating. And that was before the show's most notorious sauce,Da Bomb.