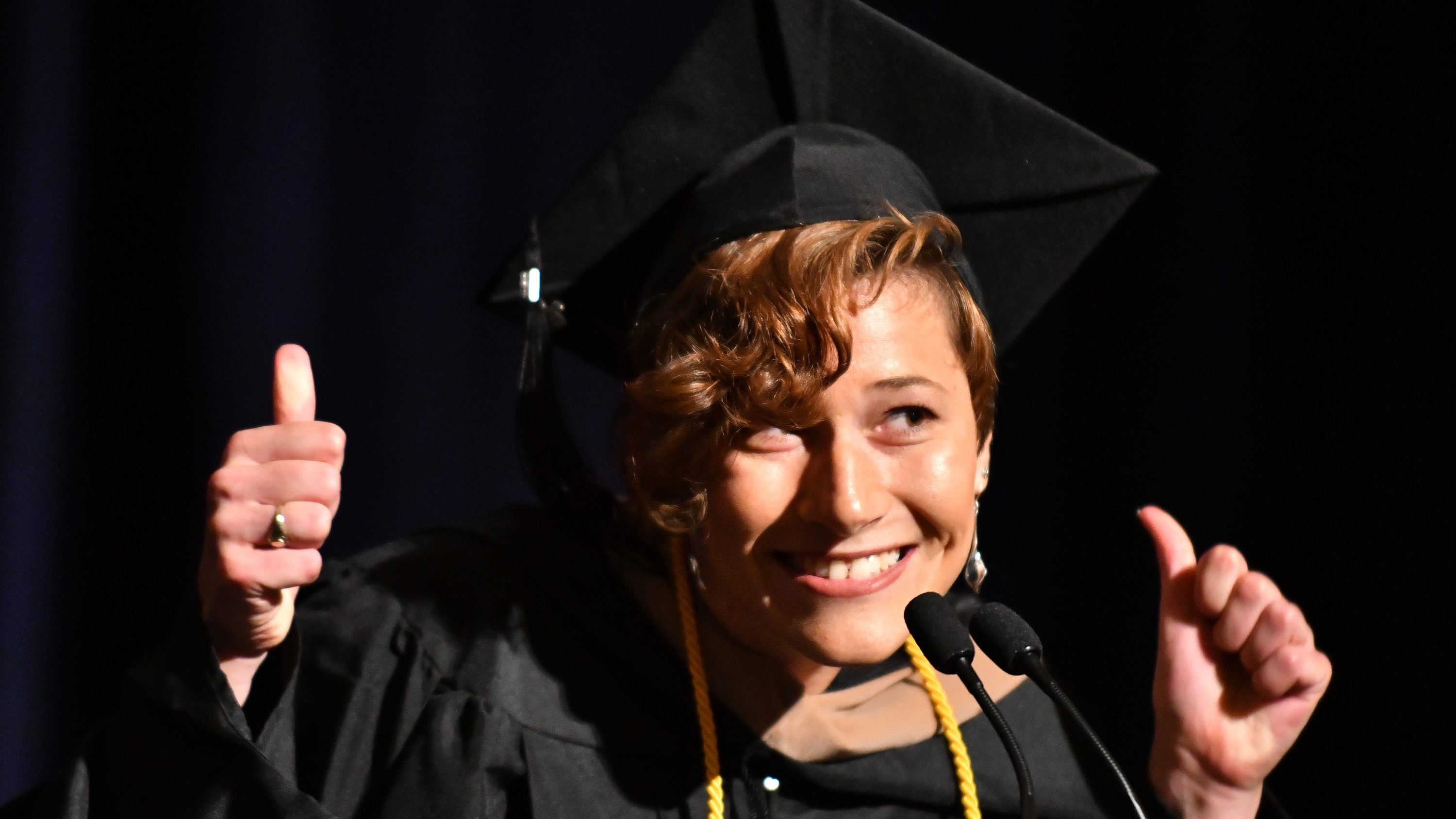 What’s business school like when you’re a woman? Historically, some have found it to be a less than welcoming experience. Before Harvard Business School undertook a massive effort to reform its boys’-club culture about a decade ago, the environment was “worse than any trading floor,” according to a 2013 article in the New York Times. The Times describes an environment where male students “commandeered classroom discussions and hazed female students and younger faculty members, and openly ruminated on whom they would ‘kill, sleep with or marry’ (in cruder terms).”

Objectification was also a running theme in a video made by MBA students at Stanford University and posted to the school’s site in 2017, which featured scantily clad women and “men swinging golf clubs suggestively,” according to The Independent. “It is quite literally a film of a hostile educational environment,” Stanford law professor and sociologist Michele Dauber told the paper.

And in a less flagrant but nonetheless pernicious example of gender dynamics across top MBA programs, women’s grades often lag behind those of men—a reflection of curricula and evaluation systems that work to perpetuate structural inequalities.

The long-running gender gap in business school enrollment is part and parcel of such problems. In 2011, women made up just 32% of students (pdf) at top business schools, according to data from the Forté Foundation. Presumably, as long as men retained such an overwhelming majority, the stereotypically bro-ish culture of MBA programs was likely to persist.

Now the tides are turning, though. In 2019, 39% of students who enrolled in the top MBA programs were women, as the Wall Street Journal reported this November.

Quartz spoke with three admissions directors to understand more about what schools have done to encourage women to seek MBAs in record numbers—and what that development says about a larger culture shift underway in business schools.

The power of women’s groups

Alex Halfpap never expected to get an MBA. In college, her focus was on finding ways to do good. She spent her post-graduation years teaching first-graders through Teach for America and working for educational nonprofits. “I kind of thought about business school as a little bit of a boys’ club,” she says.

But as Halfpap gained more experience in the working world, she came to see pursuing an MBA as a logical step toward achieving her bigger goal of one day running an educational or social-services organization. “To run those effectively, it’s good to have an arsenal of skills like someone in a Fortune 500 company,” she says.

Today, she’s a first-year student at the Olin School of Business at Washington University in St. Louis, and a member of a class that is 49% women.

Halfpap says one factor that helped sway her to choose the program was Olin Women in Business, or OWIB, a student-run organization that offers services and events ranging from peer mentorship programs that match first- and second-year students to a “Men as Allies” initiative that encourages men to think about ways to support gender equality. (The Haas School of Business at the University of California, Berkeley has a similar initiative—known as “Manbassadors”—run through its Women in Leadership Club.)

“Learning about what OWIB does at Olin for women was a really big draw,” says Halfpap, noting that she felt the group was “really focused on helping Olin women grow and thrive.”

Ruthie Pyles Stiffler, assistant dean and graduate admissions director at Olin, says student groups like OWIB “have played a tremendous role in our ability to attract and retain top women talent.” The groups help assure prospective MBA students that they’ll be able to tap into supportive communities when they arrive on campus—and that they’ll receive an education that equips them to navigate the sometimes-outdated norms of the corporate world. To that end, Stiffler highlights a recent event series that aims to educate students in the hallmark pastimes of business leaders, from golf and college basketball’s March Madness to scotch and whiskey tastings.

“It’s really about exploring and creating access to hobbies or networking activities that have traditionally been male-dominated,” says Stiffler. That’s not to suggest that the golf club should remain the default option for those hoping to strike a deal. But there’s something to the idea of “giving women access,” she says, “so that even if they don’t wish to participate, they still could.”

Soojin Kwon, managing director of full-time MBA admissions and programs at the University of Michigan’s Ross School of Business, cited her school’s Michigan Business Women group as a draw for applicants. The club is known for initiatives like the “conversation pods,” launched this year, which offer a structured way for women in the program to engage in small-group discussions after events and speakers, and to process problems encountered on campus or in the larger world.

When it comes to recruitment, the group “works closely to connect with prospective students on the front end,” Kwon says, noting that membership in Michigan Business Women has doubled in the past five years even as Ross’s class size has stayed the same. That’s in keeping with the larger gender shift at Ross: Over the past five years, the school has seen a 58% increase in applications from women, compared to a 9% increase in applications from men.

As the training grounds for future business leaders, MBA programs are often seen as the kind of environments that foster competition in preparation for the dog-eat-dog masculinity contest cultures that characterize many modern workplaces. (Picture students jostling for plum networking opportunities and rooting for one another to fail during case studies.)

But the admissions directors interviewed for this story argue that their programs offer overwhelmingly supportive environments. At the Wharton School at the University of Pennsylvania, “people on the outside of the community and culture think it’s a competitive environment, but if you speak to anyone who’s a member of it, it’s extremely collaborative,” says Blair Mannix, director of admissions for the MBA program, which welcomed a class of 47% women this fall.

A collaborative environment is indeed more likely to appeal to women, who are socialized to value teamwork and generosity. “What we see both from our students as well as our community, specifically our women, is they’re really looking for a place that will provide inclusion, community impact, and collaboration,” says Olin’s Stiffler.

Of course, to sustain that kind of environment, MBA programs need to admit students who embody such qualities, according to Ross’s Kwon. “We’re also looking at the types of students we select, both male and female, who are going to be team-oriented, supportive, inclusive,” she says.

Mannix points to Wharton’s decades-old grade non-disclosure policy—now a feature of many other top-tier MBA programs such as Columbia Business School and the University of Chicago’s Booth School of Business—as one example of how it combats the toxic elements of competitive cultures. Students sign a pact that they won’t disclose their grades to potential employers after graduation, which helps liberate students from the pressure to outperform one another in the classroom—and focus on challenging themselves instead. “We want women to take risks in coursework,” Kwon says. “We want you to take a class you might not do well in.”

Another factor that can help explain the increase in applications from women? According to Kwon, a lot of schools have started accepting the widely used GRE exam for graduate schools in place of the GMAT, the standardized test specific to graduate management programs. “That’s widened the funnel for business schools and made it more accessible to students interested in a diverse range of things and not just straight business,” Kwon says. A student who’s interested in finding ways to combat poverty, for example, might send in applications not just to business schools, but to masters’ programs in public policy and urban planning.

In effect, the move to accept the GRE is a signal that business schools are increasingly aware that talented students’ ambitions may lie well outside of Fortune 500 companies. With that in mind, many schools also offer dual-degree programs in areas like healthcare or government—another feature that’s likely to appeal to diverse pools of students who aren’t necessarily eager for an expense-account lifestyle after graduation.

“An MBA is really a utility degree, and it can kind of be leveraged however you want,” says Halfpap. “You don’t have to go into investment banking or on Wall Street. You can use it for whatever.”