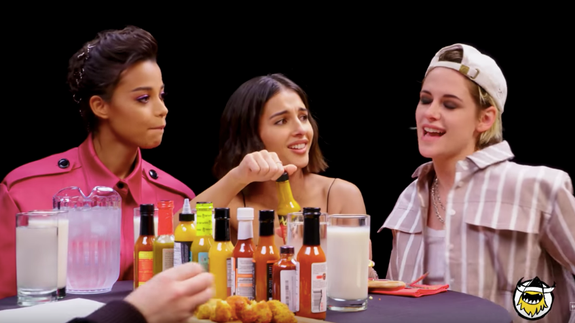 Kristen Stewart brought on her Charlie's Angels co-stars for "the last dab" on the spicy celebrity interview series Hot Ones. Together they attempted to stomach the hottest sauce of the bunch and succeeded (although some perhaps a bit more than others).

During the show, Stewart also talked about dropping the f-bomb on Saturday Night Live , authenticity in celebrity interviews, and Shia LaBeouf, who also appeared on Hot Ones this season.

"I'm curious to know how Shia was, 'cus he's like a beast," Stewart said.

"What he would do was he'd pop the top on all of these [bottles] and he was pouring more..." host Sean Evans responded.

WHO: Don't wear masks if you are not sick