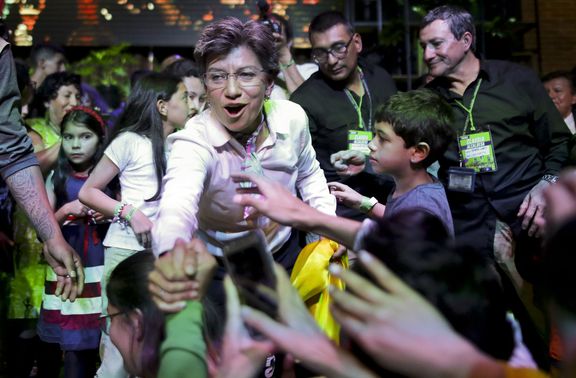 In electing her, Bogota voted to defeat machismo, racism, classism, homophobia, and xenophobia, said López. “Let there be no doubt—change and equality are unstoppable.”

Being the mayor of Bogota is considered the second most important position in the country after the presidency, and López’s glass-shattering victory is being lauded as an important advancement for LGBT people and women.

But while Bogota, a city of more than 7 million people, made history this week, regional election results across the country showed a different picture: just 11.8% of Colombian municipalities elected women to lead them, according to women’s rights group Sisma Mujer.

That means that fewer women were elected this year than in the country’s last local elections in 2015. Some hope López’s presence in office might help to reverse this national trend.

Women to the fore

López is a member of Alianza Verde, the country’s green party, and was elected into office with just over 35% of the vote. She came to prominence in the mid-2000s, when she investigated voting irregularities which tied dozens of politicians to rightwing paramilitary groups, known today as Colombia’s para-politics scandal. A former senator and 2018 vice presidential candidate, López is known throughout Colombia for rallying against corruption. Last year she pushed for the adoption of an anti-corruption bill, which (infamously) failed to pass when too few people voted in a national referendum.

López comes from a middle-class background and is the daughter of a school teacher. According to political analyst Sergio Guzmán, her victory shows that Colombians now want their politicians to focus on anti-corruption tactics and are moving against traditional party structures and family-based political affiliations.

“It just reaffirms how fiercely independent Bogota is as a city,” said Guzmán. “As Bogota goes, the country goes in a way.”

“It’s very important that she’s a woman, but also that she’s a diverse woman.” For many, López’s election represents change in Bogota, where inequalities against women and LGBT people are disturbingly common. For example, violence against the city’s women is still frequent—between 2016 and 2019, there were more than 75,000 cases of physical and sexual violence against women alone. According to a recent report, 542 LGBTI people have been murdered in Colombia since 2014.

The simple fact that López is in power won’t reverse this violence. But her win is significant. “It’s very important that she’s a woman, but also that she’s a diverse woman,” said Sisma Mujer researcher Carolina Mosquera. “[Her win] is important for the entire country, and also for lesbian women and LGBT people who’ve never been represented like this from such an important position.”

On election night, López celebrated her victory by kissing her partner, senator Angélica Lozano. The photo of the kiss went viral. After one journalist called the kiss “unnecessary,” some Colombian couples (both same-sex and heterosexual) took to Twitter to support López, posting photos of them kissing, accompanied by the hashtag #besochallenge.

Women across the country did see other important wins. In Medellin, Colombia’s second-largest city, the new women’s political movement Estamos Listas (“we’re ready”) won its first seat on city council. Known in Medellin for sporting purple and yellow owl bandanas, the collective of 2,000 women plans to focus on issues related to gender in an effort to make things better for women.

In the western municipality of Silvia, Cauca, Mercedes Tunubala Velasco was elected as the first Misak indigenous woman mayor to lead the town.

Though these elections show that pockets of Colombia are becoming more progressive, not all of the country is yet following suit. This year, fewer women were elected into regional government across the country. Colombia’s 1,101 municipalities elected just 130 women as their mayors—a 3% decrease from the country’s last regional elections in 2015, according to Sisma Mujer.

And throughout Colombia’s 32 departments (the equivalent of states), of the 176 politicians who ran for governor, the group reports, 21 were women. Two women candidates were elected into office; more governors named Luis were voted into office than women this year.

Candidates also faced high levels of violence this year, in the first local elections since the government and the FARC rebel group signed a peace accord in 2016 (that hard-won peace has since frayed). Seven candidates, both male and female, were assassinated ahead of the local elections, and more than 50 were threatened. In western Colombia, popular liberal candidate Karina Suárez and five others—including her mother, local activists and a city council candidate—were murdered in September when their SUV was attacked by gunfire and a grenade. The government blamed the attack on FARC dissidents.

Before her assassination, Suárez published a warning she was in danger and called on authorities to act. Experts told Al Jazeera her death was a “political femicide.”

“Women who participate in politics are targeted with violence for engaging in politics, but also for breaking structures and mold pre-established for women,” said Mosquera of Sisma Mujer.

“[Claudia’s] arrival propels the agendas of women at a national level.” However, she adds, having a woman mayor of Bogota normalizes the presence of women in public space. “The fact that Claudia is the new mayor also allows us to break the macho biases, which are where reports of violence against women stem from.”

While female participation in politics still lacks across Colombia, Mosquera hopes López and other women in important positions of power will serve as role models for young women and girls. “[Claudia’s] arrival propels the agendas of women at a national level,” she said. “It also shows that women can enter electoral processes and come out as winners.”