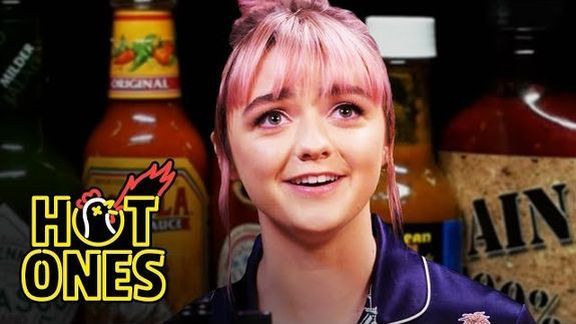 "Is it true that you almost missed your Game of Thrones audition because you didn't want to miss a class trip to the pig farm" asked Hot Oneshost Sean Evans to this week's wing warrior, Maisie Williams.

"Yeah, that's true," she said. "Just really wanted to go on that school trip, but you know, I wouldn't be here today...you wouldn't have wanted me on the show if I had gone to that pig farm."

There you have it, GoT fans. Arya Stark was that close to being totally different than the Arya Stark you know and love. And the pigs were almost to blame.

As for the chicken wings, the Thrones star worked her way up the Scovilles to claim the iron throne of the hot sauce world and discussed a variety of topics, from her time on the show, to hanging with hyenas in Africa, to getting a shout-out from Drake at the Billboard Music Awards.