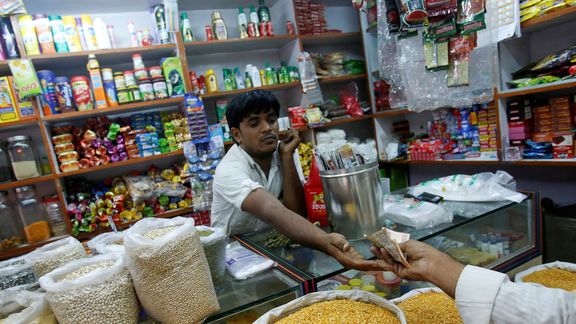 There seems to be no end to bad news for the Indian economy.

Yesterday (Aug. 28), India Ratings and Research reduced its estimate for India’s economic growth in financial year 2020. “GDP will grow at a six-year low of 6.7% in the current financial year due to weak consumption demand, uneven monsoon, and (a) slowdown in manufacturing growth,” the ratings agency said in a press release. Its earlier forecast was a GDP growth of 7.3% this fiscal.

Such negative outlook in quick succession by two rating agencies is worrisome for critical sectors powering the economy such as fast-moving consumers goods (FMCG), automobiles and manufacturing, and the cracks have already started appearing, according to experts.

“Private consumption, which has been the mainstay of aggregate demand, has come under pressure in urban as well as rural areas lately,” said Sunil Kumar Sinha, principal economist and director public finance, India Ratings and Research. “Reduced income growth of households has taken the sting out of urban consumption. Meanwhile, drought and near-drought conditions in three of the past five years coupled with a collapse in food prices have taken a heavy toll on rural consumption.”

The distress in the Indian economy is becoming more visible and real with every passing day.

The automobile sector was among the first one to feel the pinch of the slump as it witnessed an 18% year-on-year drop in sales in July 2019, according to data released by the Society of Indian Automobile Manufacturers. Around 300 car dealerships have shut down over the last few months leading to an estimated job loss of one million in the auto component manufacturing industry alone.

However, even as their growth slowed, the FMCG sector had managed to stay afloat. But not anymore.

One of the country’s leading biscuit makers Britannia Industries, was the first to highlight the slowdown in consumption earlier this month. “Consumers are thinking twice before buying even a Rs5 product, indicating a serious issue in the economy. We’ve only grown 6% and the market is growing slower than that,” Varun Berry, managing director of Britannia Industries had said at the company’s post-earnings conference call on Aug. 09.

Britannia’s rival Parle Products, too, went public with its struggle to cope with the decline in sales of its flagship Parle-G biscuit. “The growth rate has tapered, but premium products are still growing. From a growth of 25%, they have dipped to 8-9%, but they are still growing, whereas the likes of Parle-G are declining. The volumes of Parle-G have declined by 7-9%,” said Mayank Shah, category head, Parle Products, in an interview with Business Today magazine.

The decline in sales of affordable products like biscuits, particularly Parle-G, which is considered a staple by many in the country, highlights the gravity of the situation.

“While not heavily exposed to external pressures, India’s economy remains sluggish on account of a combination of factors, including weak hiring, financial distress among rural households, and tighter financing conditions due to stress among non-banking financial institutions,” said Moody’s Investors Service in a note on Aug 23.

And the road to recovery may not be easy.

Responding to the deepening crisis, on Aug. 23, India’s finance minister Nirmala Sitaraman announced a number of measures to revive sluggish growth across sectors. However, experts are sceptical if these measures may prove adequate in the short-term.

“The major contributors to the economy’s investment pie are households (which include unorganised and unregistered enterprises, 38.6%) and private corporations (37.9%). Their spending holds the key for reviving broad-based investment activity in the economy,” said Sinha of India Ratings and Research.

The only silver lining is the Reserve Bank of India’s (RBI) move to transfer a surplus of Rs1.7 lakh crore ($24.62 billion) to the government on Aug. 26. “With access to surplus money, achieving financial year 2020 fiscal deficit target will not be difficult for the government,” India Ratings said.

Going ahead, it’s to be seen how the government uses these funds to arrest economic slowdown, revive sluggish consumer demand and encourage investments.