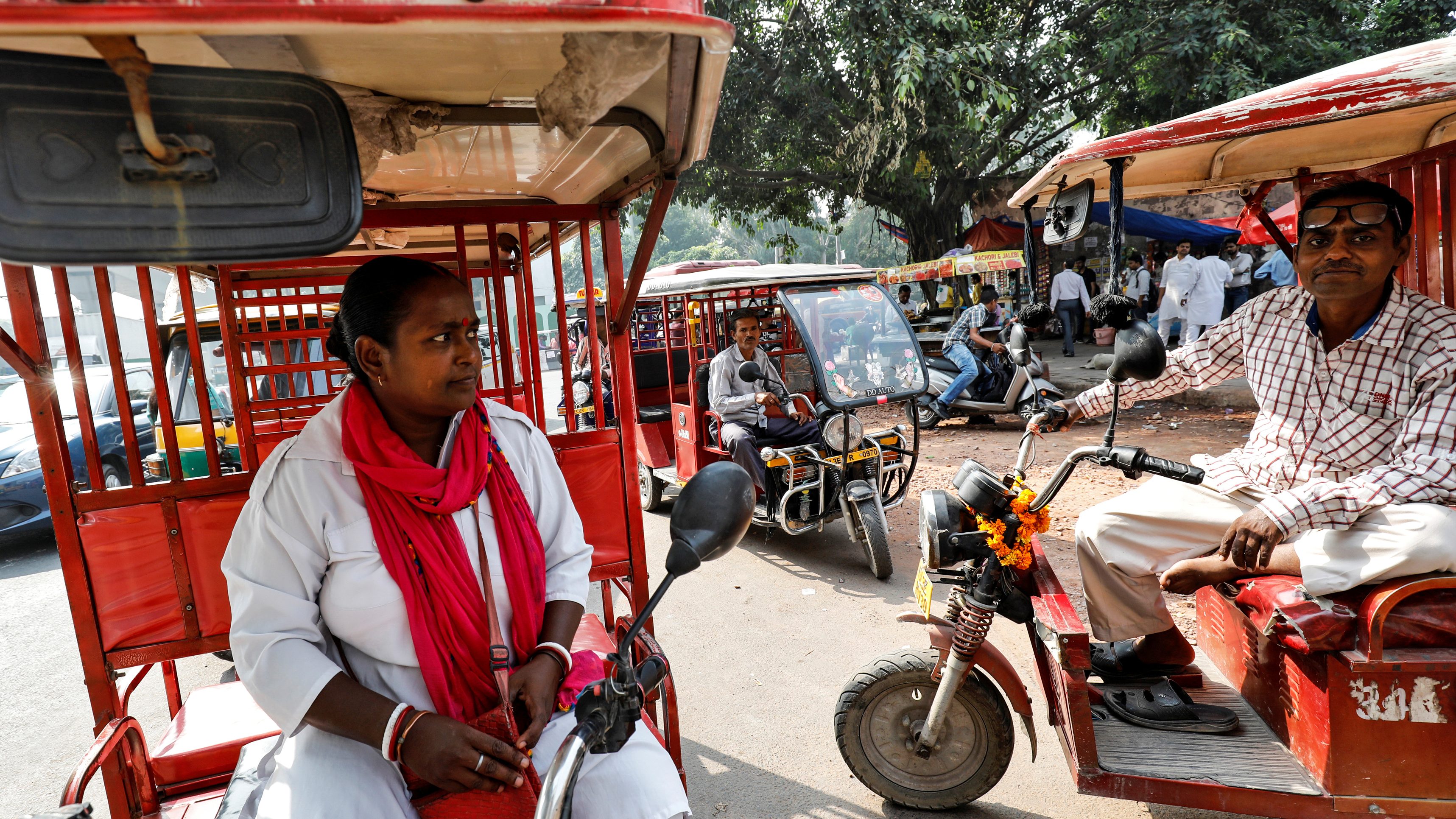 Jugnu Prasad manoeuvres silently through the congested streets in Varanasi in the northern India state of Uttar Pradesh. While heavy air pollution and the sputter of fossil fuel-powered vehicles engulf the city, Prasad’s ride does not leave a trail of fumes behind and runs quietly.

The 40-year-old former cycle rickshaw puller drives a three-wheeler electric rickshaw that he purchased on a loan with help from Varanasi-based social venture SMV Green Solutions.

The company provides a safe and affordable transport alternative for last-mile mobility, or the last leg in a passenger’s journey, usually delivered by buses and auto-rickshaws. SMV operates in two of the country’s most populous states—Uttar Pradesh and Bihar—where it provides support to people from low-income groups to buy and operate e-rickshaws.

In 2015, Naveen Krishna founded the company intending to eliminate the drudgery faced by manual rickshaw pullers prevalent in northern India.

For the rickshaw pullers, lack of access to funds and confidence to try new technology were barriers to upgrading to an electric vehicle (EV) independently. With this in mind, the company tied up with multiple entities involved in procuring a ready-to-drive e-rickshaw. “We are a bridge connecting the person to an e-rickshaw manufacturer, financial institution sanctioning loans that banks won’t normally give to low-income groups, battery providers, and authorities to complete the paperwork,” Prasad said.

The company’s thrust rides along with the state government’s objective of achieving 100 percent electrification of auto-rickshaws by 2030 in Varanasi and other cities.

“Despite toiling hard, rickshaw pullers usually pay rent for their vehicle and lack healthy working conditions. The SMV model is about ownership. After about 24 months of the loan payment, they become proud owners of the e-rickshaw,” Krishna said. 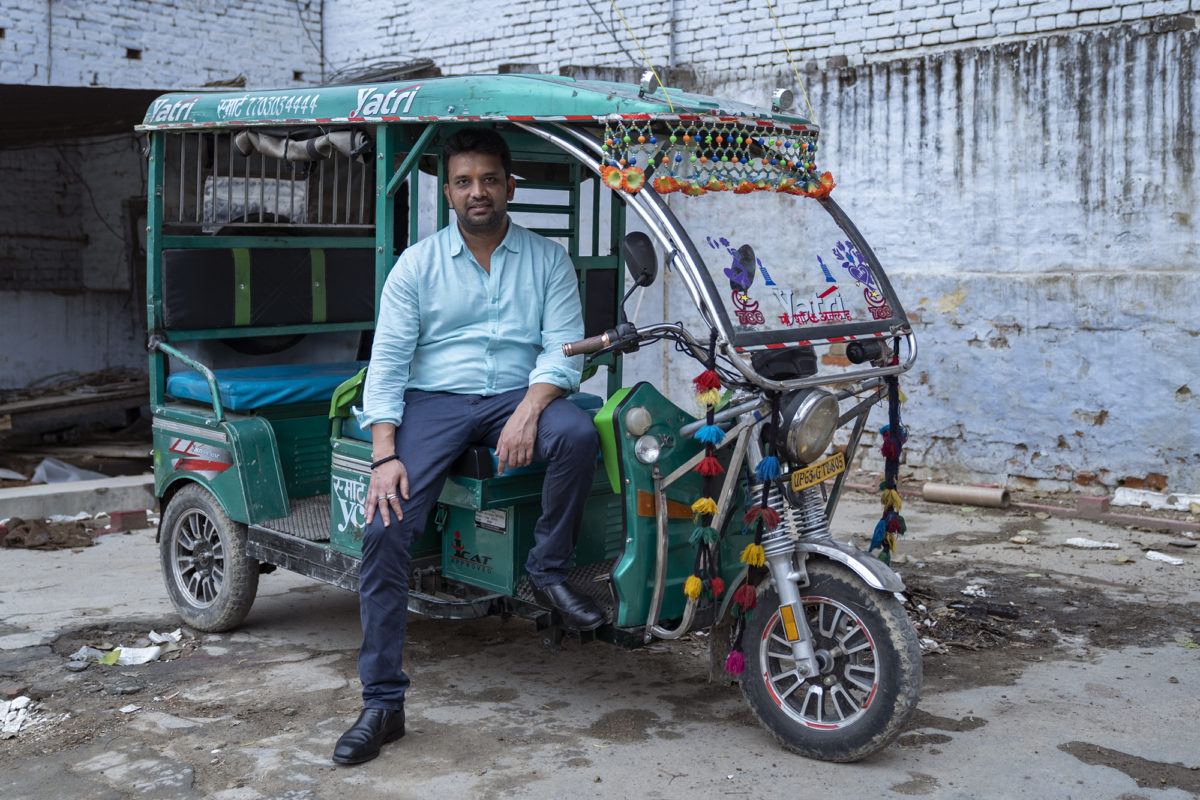 Naveen Krishna, the founder of SMV Green Solution, at one of the company’s workshops in Varanasi, India.

A recent survey showed that six of the world’s most polluted cities in terms of PM2.5—particulate matter in the air so small that they lodge directly in the lungs when breathed in—are in Uttar Pradesh and three are from Bihar. Varanasi ranked 14th on the list. Particulate matters and polluting gases from automobile emissions contribute to making breathing the air in the city a death sentence.

Sugandha Pal, an urban transport planner and a research associate at The Energy and Research Institute (TERI) who studied autorickshaw emissions in Bengaluru, said, “7.5 percent of total emissions in India are from the transport and automotive sector.”

Citing TERI’s estimates, Pal added, “Three-wheelers could increase from 6.8 million in 2017-18 to 19.5 million in 2030 and further to 66.25 million in 2050, which provides scope for leapfrogging towards e-rickshaws and replacing the conventional three-wheelers.”

The net savings from EV deployment (the difference between emissions produced in the lifecycle of EVs and that by an equivalent internal combustion engine fleet) was 40 million tonnes of carbon dioxide equivalent (MtCO2e) in 2018, according to an annual publication from the International Energy Agency (IEA) about electric mobility across the globe.

The stock of electric three-wheelers in India is about 2.38 million.

SMV has enabled 1038 e-rickshaw ownerships, of which 550 are in Varanasi, and the company estimates that it has reduced 2076 tonnes of CO2 emissions since its inception four years ago.

For its efforts in uplifting the lives of those from marginalised communities while reducing air pollution and carbon emissions, the social enterprise was recently recognised at a global level and won the 2019 Ashden Awards under the international sustainable mobility category.

Krishna’s wish is to see his homeland less polluted and ensure that his children don’t have to “roam around with oxygen tanks.” But he agrees that on the ground, the environment is not the reason why people chose to switch to/purchase e-rickshaws.

“The authorities have stopped renewing and issuing new permits for petrol and diesel autorickshaws in the city. Also, driving an e-rickshaw fetches the same amount between Rs12,000 to Rs15,000 (approximately $170 to $210) per month but is cheaper to maintain,” he said. “People will obviously look at their livelihood and decide.”

Prasad who earlier ferried passengers on a cycle rickshaw for over six years and switched to an e-rickshaw ten months ago said, “My body had become frail earlier. Now I feel better.”

Many like him opted to drive the toto, as the e-rickshaw is called, as an attempt to leave behind the life as a rickshaw puller, power loom worker or a factory labourer, with the ambition of a better livelihood and owning something of their own. 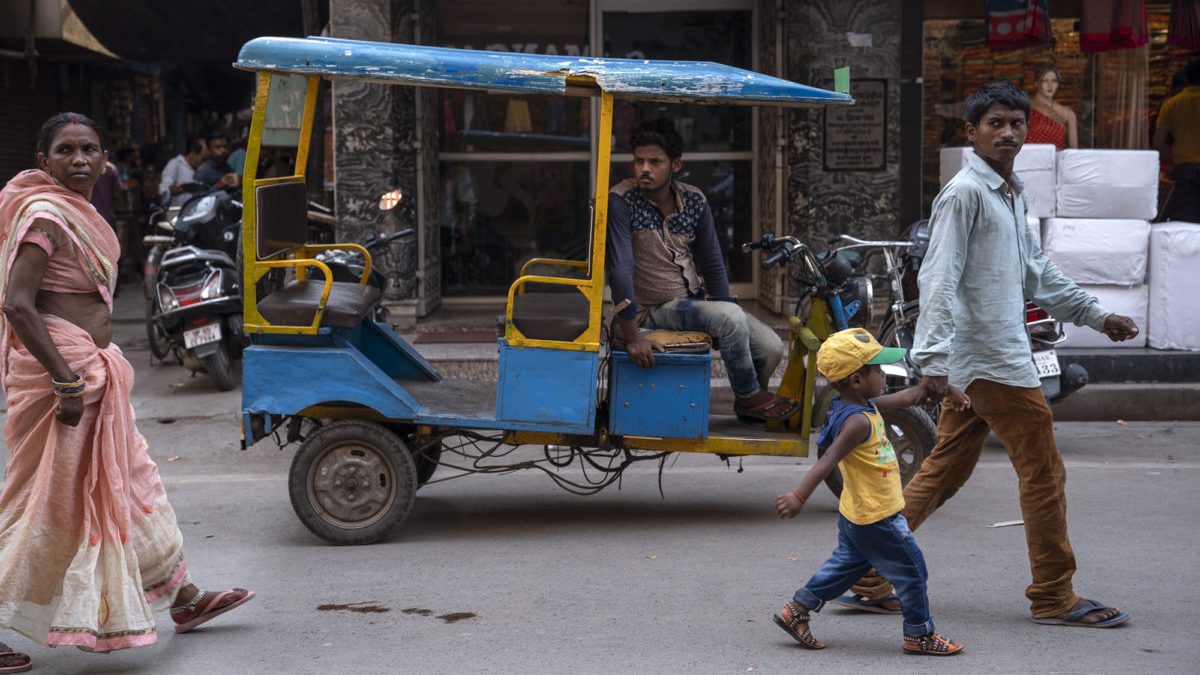 An electric rickshaw, locally known as toto, on the streets of Varanasi.

In March, the Indian government approved the second phase of Faster Adoption and Manufacturing of Electric Vehicles (FAME II) to boost the transition to electric mobility. The scheme aims to reduce the purchase price of EVs used for public or shared transportation, which includes rickshaws. Its successful implementation is expected to create a significant reduction in oil imports and emissions.But the electrification of India’s transport sector is in a bumpy ride. Considering e-rickshaws, Krishna feels that the price and taxes on lithium-ion batteries, the charging infrastructure, and the commercial rate of electricity per unit are the biggest hurdles.

“As compared to the eight to ten hours of charging required by lead-acid batteries that are widely used, lithium-ion batteries need only around three hours to reach full charge and last for 100 km,” explained Krishna. “But they are very expensive [almost four times] and to charge them you still need to visit a garage or a charging station and lose three hours of opportunity to earn money.”

To tackle the issue, SMV has established two battery swapping stations in Varanasi with a capacity to charge 15 batteries at a time. The drivers can exchange their drained batteries with a fully charged one for Rs200 ($2.88) and get back to business within minutes. Krishna is convinced that in his region, swapping stations are the best option for an e-mobility infrastructure.

People usually choose e-rickshaws for distances less than four or five kilometers, estimated the drivers in Varanasi. The models currently on road have a maximum speed of 25 km/hr. Though the lightweight toto itself is noiseless, anyone riding the slow-moving vehicle in the city will be subject to a lot of agitated honking from other vehicles. “When manufacturers release e-rickshaws matching the speed of regular rickshaws, their use will be wider,” Krishna added.

For expanding electric public and shared transportation in India, Pal said that dependence on imports due to lack of production/manufacturing, high cost to acquire electric bus fleets, lack of research and innovation in batteries and EVs, lack of charging infrastructure, battery disposal systems and scrapping policies for old diesel vehicles are some of the challenges ahead.

The Indian government recently announced a reduced GST rate of five percent instead of 12% on electric vehicles. It reduced GST rates on chargers and charging stations from 18% to 5%.

The e-mobility industry is expected to create 10 million jobs. Pal also believes that the sector will provide a lot of job opportunities globally and in India and positively reflect on the nation’s economy due to the reduction in oil imports. But she added that some of the micro-industries dependent on diesel/petrol vehicles that provide jobs to many would need careful hand-holding during the transition phase.

An optimistic and opportunistic Krishna is hopeful for positive outcomes of schemes such as FAME II. “As policies are enabled, there’ll be more competition, more manufacturers of batteries and vehicles. More products will lead to cheaper rates.”

Empowering women with the freedom of mobility

SMV currently employs 55 people and has shifted gears to a self-sustaining model. The enterprise earns its share through margins from vehicle dealers, battery charging service, and selling spare parts.

In 2017, SMV launched the Vahini programme to enable women to own an e-rickshaw and earn a livelihood. “Vahini provides dignified jobs to women and safe, affordable transport for female passengers and children,” explained Krishna. “Freedom of mobility is empowerment,” he said.

Despite the numerous social challenges, Krishna feels the e-rickshaw became a vehicle for achieving multiple goals: women empowerment and emission reduction. Currently, 42 female e-rickshaw drivers benefit from this programme, most of them in Prayagraj (formerly Allahabad), around 120 km from Varanasi. Many more will join the movement soon, he says with hope.

With nine years of experience as an entrepreneur, Krishna pays close attention to what his customers want and what the city needs. “I’m happy when the customer feels that they are in a better place,” he said. “Also, I know that it’s not just vehicles creating a bad environment here. But I’ll do my bit in fixing it.”

“Our motto is not just selling e-rickshaws. Our vision is to be a one-stop solution for last-mile green transport,” emphasised Krishna.

“If there’s a new clean technology available tomorrow, we’ll adapt to that and enable an ecosystem around it.”

This post was first published on Mongabay. We welcome your comments at ideas.india@qz.com.