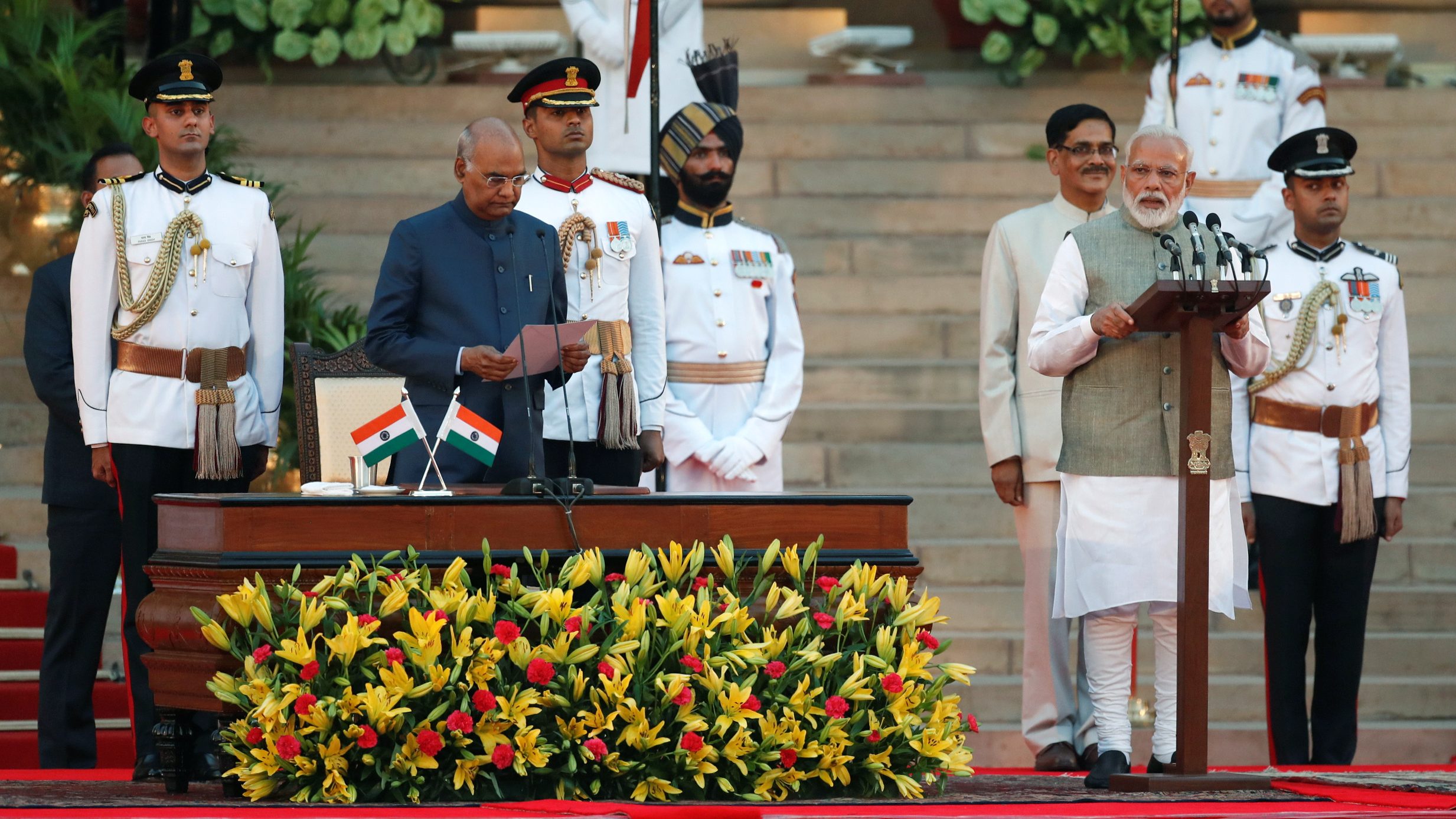 Narendra Modi today (May 30) took oath as India’s prime minister in a spectacular ceremony, kicking off his second straight term following a massive win in the national elections held in April-May.

President Ramnath Kovind administered the oath of office and secrecy to him at the Rashtrapati Bhavan, the presidential palace, in New Delhi. Modi was dressed in his trademark white pyjama kurta and a grey Modi jacket. The event, which began at around 7pm under sultry weather, was attended by over 8,000 guests, with around 10,000 security personnel specially deployed in and around the venue.

Like in 2014 when Modi took office, the swearing-in ceremony was held in the spacious forecourt of the Rashtrapati Bhavan—a break from the tradition followed by his predecessors who were all sworn-in indoors. The majestic venue was spruced up further to showcase the event as a grand one, complete with red carpets, flower decks, and illumination.

Modi’s chosen council of 58 ministers, who collectively will form India’s new government, also took their oaths. However, their administrative portfolios have not been disclosed yet. The previous Modi government had 66 ministers.

Among major overall changes to the council are the addition of Amit Shah, president of Modi’s Bharatiya Janata Party (BJP), who had not been a part of the previous government. A key absence was that of Arun Jaitley, Modi’s finance minister in his previous term. Jaitley had declined any position this time. Sushma Swaraj, former foreign minister did not contest the election this year, citing personal reasons. Though she could still have been made a minister this time, she wasn’t on the list.

The swearing-in ceremony this evening was attended by a host of dignitaries, both Indian and foreign.

Among attendees were family members of paramilitary personnel killed in Pulwama attack in the state of Jammu & Kashmir weeks before the election. The bombing by Pakistan-based Jaish-e-Mohammed terror group killed over 40 paramilitary personnel, fuelling anger and a nationalist undercurrent across the country that gave Modi’s campaign a considerable push.

Leaders of member countries of the Bay of Bengal Initiative for Multi-Sectoral Technical and Economic Cooperation—Bangladesh, India, Myanmar, Sri Lanka, Thailand , Nepal and Bhutan—were invited for the event this time. This was viewed as a fresh diplomatic outreach by Modi. However, not all these countries sent their top leaders for the ceremony.