What Modi’s most popular tweets say about his election campaign

On March 16, Modi prefixed the Hindi word for watchman to his Twitter display name and launched a political campaign asking Indians to proclaim #MainBhiChowkidar (I, too, am a watchman).

Your Chowkidar is standing firm & serving the nation.

But, I am not alone.

Everyone who is fighting corruption, dirt, social evils is a Chowkidar.

Everyone working hard for the progress of India is a Chowkidar.

Today, every Indian is saying-#MainBhiChowkidar

The tweet became a top trend worldwide for a few hours, and several Twitter users followed the prime minister in adding chowkidar before their display names.

An analysis of Modi’s tweets since June 2018 shows the #MainBhiChowkidar campaign launch tweet was his second most popular, with over 56,000 retweets as of today (April 09).

The prime minister’s most popular tweet (over 66,000 retweets) was the one that followed Pakistan repatriating Wing Commander Abhinandan Varthaman to India. The Indian Air Force pilot had been captured a few days earlier after his jet was shot down in an aerial dogfight with Pakistani fighters along the Line of Control between the two countries in the state of Jammu & Kashmir.

The nation is proud of your exemplary courage.

Our armed forces are an inspiration for 130 crore Indians.

However, among the top 10 is also another #MainBhiChowkidar tweet celebrating the campaign as a success.

Happy that #MainBhiChowkidar has ignited the Chowkidar within all of us. Great fervour!

Ecstatic to see the passion and commitment to protect India from corrupt, criminal and anti-social elements.

Let us keep working together for a developed India. 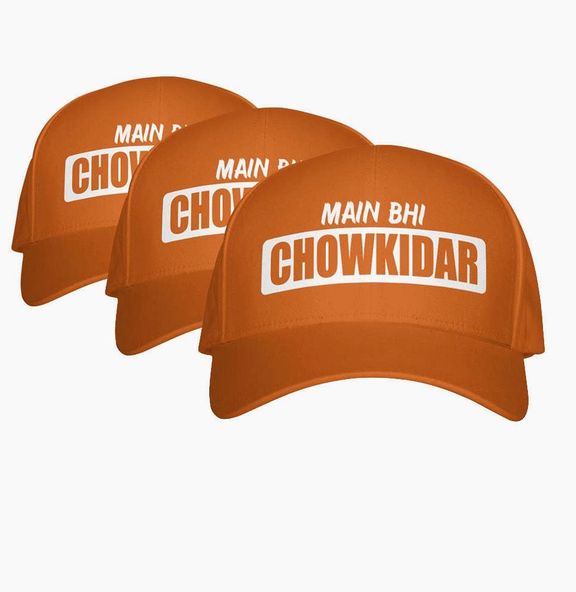 Today, Modi’s entire cabinet and other party leaders have prefixed chowkidar to the display names on their social media profiles. Since launching the campaign, Modi’s Bharatiya Janata Party has also been busy selling #MainBhiChowkidar merchandise such as T-shirts and caps, on its official app as well as on Amazon. Last month, Modi also addressed 2 million professional watchmen live on television.

During his five-year tenure, Modi has occasionally used chowkidar in his speeches to assert that he is guarding public interest and taxpayer money against corruption. He had first introduced the term during the 2014 election campaign while appealing for votes, saying that he didn’t want to be prime minister but only the watchman of the country.

However, the term came into its own only when Rahul Gandhi, president of the BJP’s main rival party, Indian National Congress, began playing on it to attack Modi with a new catchphrase: “Chowkidar chor hai.” (The watchman himself is the thief.) In Gandhi’s campaign rallies, crowds could often be heard chanting the phrase back.

Yet, with only one tweet of #MainBhiChowkidar, the prime minister blunted the attack and declared that Gandhi’s slogan has insulted India’s professional watchmen.

Microsoft 'to replace journalists with robots'

China Says A Coronavirus Vaccine May Be Ready This Year