A poll released by the Wason Center for Public Policy at Christopher Newport University revealed a majority of Americans believe the press publish fake news for political reasons.

Ironically, or perhaps demonstratively, most press either ignored the poll, or cast it as a Republican problem.

The poll's authors write of the pertinent question that it shows Trump's "war on the press" is working. They clarify that they used very carefully chosen words, which is an important point.

Here we ask voters to agree or disagree with the following statement :"Our nation's major news organizations publish fake news stories for political purposes." We were quite intentional about the wording. We wanted to be sure respondents understood we were talking about large, traditional media sources like our nation's major newspapers and not blogs or "fringe" sources. 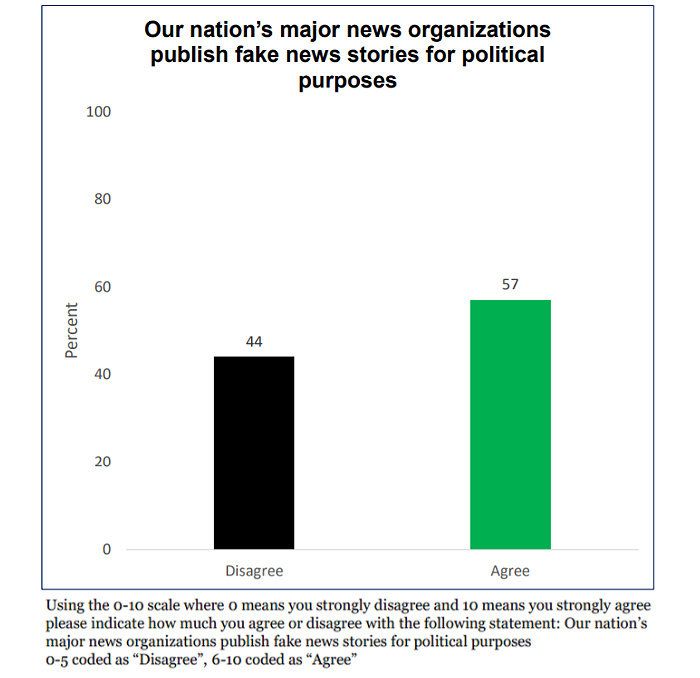 Understanding that the words were carefully chosen to get at a specific mindset, and acknowledging those who conducted the study choosing to focus on the large (but predictable) share of Republicans (86%) who mistrust the press, it is a far more noteworthy point of data how the other two self-identification groups panned out.

61% of Independents and 31% of Democrats agree that the nation's major news outlets are publishing fake news stories for political purposes.

For the media, that number should be a gut check.

"Nine out of 10 Republicans think the major news outlets — WSJ, NBC, CBS — intentionally publish fake news to hurt the president," said Wason Center Assistant Director Rachel Bitecofer in an interview. What she, and subsequent news reports, did not focus on was that the overall answer is six in ten Americans feel that way.

It is fitting that the poll showing people by a majority distrust the media and think they publish fake news for partisan reasons would be spun by partisans and ignored by the news, isn't it?

For better takes on the results, see the responses from college students asked about it by WHSV. Seriously.