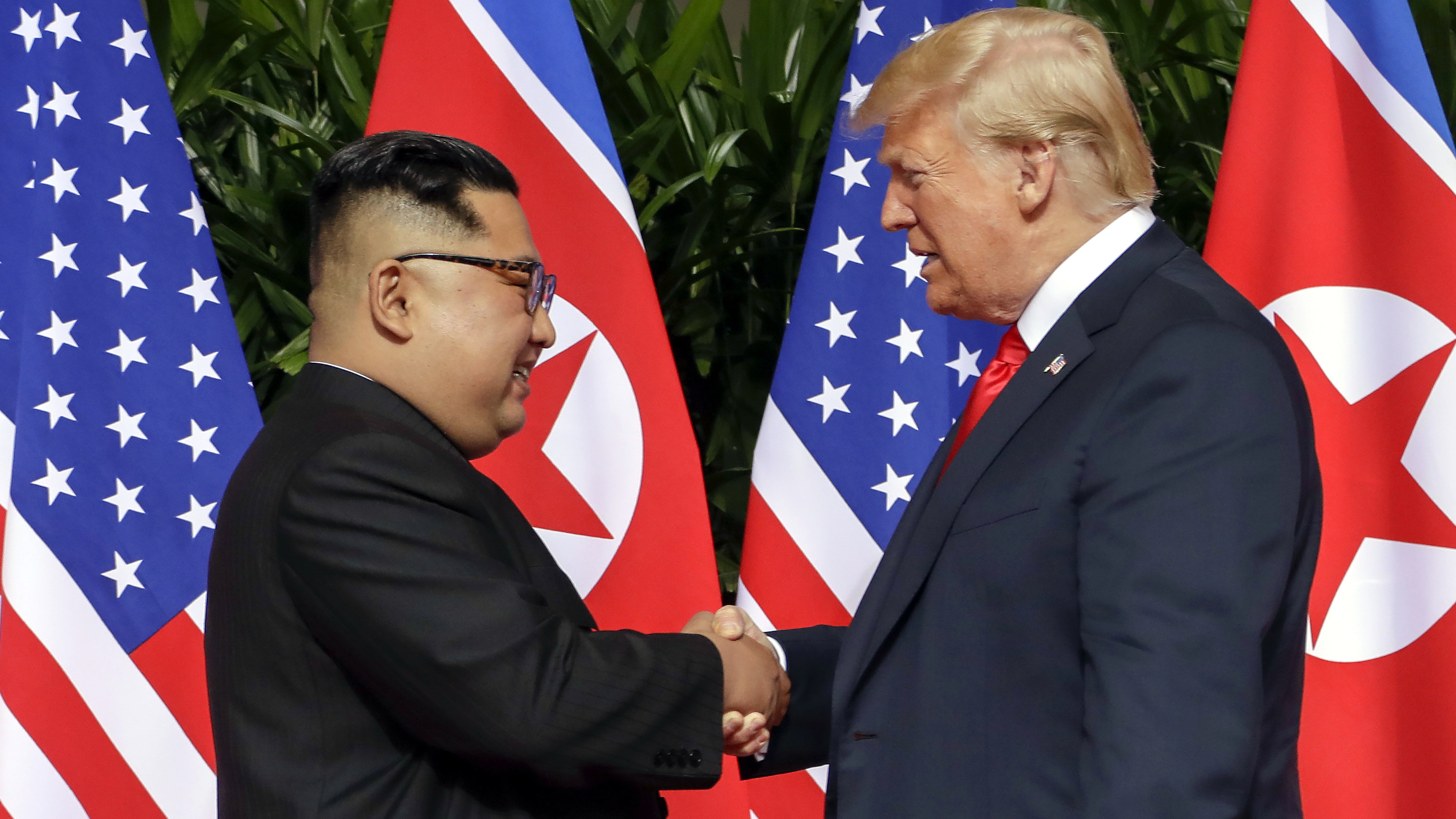 The second diplomatic meet-up between US president Donald Trump and North Korean autocrat Kim Jong Un is set to begin in Vietnam on Feb. 27. The US goal is to push North Korea away from nuclear brinksmanship and toward a responsible role in the world; North Korea is seeking access to global markets and recognition as something other than a pariah state.

National security experts aren’t expecting much progress from the talks, given that the last meeting between the two leaders, in Singapore last year, produced no concrete accomplishments. Here’s what they are thinking about as the negotiations get underway.

Anything is better than 2017

“We all remember how intense the situation was at the time, as North Korea tested missiles of all kinds almost every other month and tested the largest nuclear weapon to date,” Andy Kim, a high-ranking CIA official who met with Kim Jong Un in 2018 before retiring last year, said in a speech on Feb. 25. “I witnessed for the first time how many South Koreans, who had been immune to the North’s threats before, were taking this threatening situation seriously.”

The year Trump took office, Kim’s missile and nuclear tests hit a new cadence. Kim, who succeeded his father in 2011, made consolidating his regime’s nuclear weapons program his primary goal. Rather than adopting his father’s failure-leads-to-death approach, Kim “encouraged [North Korean scientists] to make mistakes in order to make progress, which is the right scientific method,” says Jon Wolfsthal, a non-proliferation expert who served on Barack Obama’s national security council and now works at the non-proliferation group Global Zero.

“Everyone is going to have to assume the North Koreans have a working nuclear deterrent,” he says.

Even US Secretary of State Mike Pompeo was forced to admit as much this week, contradicting president Trump’s rosy outlook.

Focusing on the process would be most effective

Few experts outside the government expect Kim Jong Un to give up his nuclear weapons immediately or easily.

“Kim wants to be Mao—he keeps his cult of personality, his nuclear weapons, and improves relations with the United States—not [Saddam Hussein] or [Muammar Gaddafi,]” writes Jeffrey Lewis, the director of the East Asia Nonproliferation Program at the Middlebury Institute of International Studies. “Frankly speaking, living with China’s bomb has turned out better than invading Iraq and ruining Libya.”

Given that analysis, most experts hope that whatever comes out of the Hanoi meetings will be viewed as part of a positive process, not an angry bust-up that raises tensions again.

“Denuclearization is a good long-term goal, but what I’ve always thought is what’s more important there is to have a more stable, peaceful relationship as a near-term goal,” says Benjamin Friedman, the policy director at Defense Priorities, a “realist” conservative think tank. “It’s a mistake to prioritize denuclearization over that.”

“The conflict is not only about denuclearization, it is also about redrawing the geopolitical and geoeconomic map for North Korea,” Kim, the retired CIA official, said this week. “I hope that this time around, both sides would continue to keep a clear eye on the objectives and approach the process strategically.”

“I think if North Korea commits in writing that it accepts that it should eliminate its nuclear and missile capabilities, or at least its nuclear capabilities, as part of process that includes denuclearizing the entire peninsula, concluding in a peace agreement and normalization of relations with US and South Korea, that’s a step in the right direction,” Wolfsthal said. “But only as part of a roadmap that we can understand what each step we give gets us.”

Vox journalist Alex Ward has reported that the deal on the table is likely to include a symbolic (but still not legally binding) peace declaration to end the technically still-ongoing Korean war; the return of the remains of American soldiers killed in that conflict; liaison offices in each other’s countries to facilitate further diplomacy; and most importantly, an agreement for North Korea to stop producing nuclear material at its Yongbon enrichment facility.

Note: That doesn’t include a broader denuclearization commitment.

Still, if Yongbon were to shut down, “it would cap the potential growth of North Korea’s nuclear capability for some period of time,” Wolfsthal says.

But the devil is in the details. Experts fear that there will not be sufficient follow-through to ensure that the closure of that facility is more than a positive talking point coming out of the summit.

“I really hope we get to hear what ‘committing’ to the ‘shut down’ of ‘Yongbyon’ means soon,” writes Melissa Hanham, a non-proliferation researcher who works at a startup looking to track threats to humanity. “It could be fantastic. It’s could be nothing. Depends on how all these terms are defined.”

“The question is, is North Korea going to freeze and agree to a step-by-step process to eliminate nuclear weapons?” Wolfsthal says. “Real success would be agreeing to a working-level negotiation, or taking a concrete step such as agreeing to shutter the Yongbong nuclear research facility [while] under international inspections.”

Further, Yongbon is not the only place where North Korea can enrich uranium, and shutting down that facility won’t affect whatever North Korea’s existing weapons stockpile contains. The reactor there has been shut down twice before in agreements with the US, from 1994 to 2003 and from 2007 to 2013.

Wolfsthal says working out these details is never easy and any final agreement is likely to take years, recalling that “It took a decade to verify that South Africa had given up its nuclear weapons, and they only had six of them.” While there are 156 pages of detail in the nuclear weapons agreement the US signed with Iran in 2015, Wolfsthal points out, the Singapore summit statement signed in 2018 by Trump and Kim last year is only two pages long.

North Korea is using diplomacy better than the US

Observers see the US at a disadvantage when it comes to uniting an international coalition around a path forward. For example, the current moratorium on open testing observed by North Korea has more to do with North Korea’s relationship with South Korea than with Trump.

“I’m not sure Donald Trump can take much credit for the pause,” Wolfsthal says. “That ended during the Olympics when the North Koreans saw an opening to divide the South from the US, saw the South wanted to lower the temperature and wanted to have a peace process. At that point the missile testing stopped. It wasn’t before or after Singapore.”

South Korea’s president, Moon Jae-In, has built his career around peace and reconciliation with North Korea. Japan, on the other hand, is the most likely target for North Korean nuclear missiles.

While previous administrations worked to coordinate between the two US allies in the region, now there is little sense the three nations are on the same page. “Japan doesn’t want an empty political process that doesn’t address fundamental security threats from North Korea,” Wolfsthal says. “For the US to satisfy South Korea, they have to leave Japan unsatisfied.”

Meanwhile, all-important China is walking a fine line: It leadership doesn’t want a unified Korea that has a good relationship with the US on its border, but it also doesn’t want an erratic strongman with nuclear weapons. Kim has launched a charm offensive, frequently meeting Chinese leaders in Beijing to find consensus. Meanwhile, the Trump administration has picked economic fights with China even as the US seeks its help disciplining North Korea.

Going forward, what can the US and North Korea do to approach a final settlement? Andy Kim, the US intelligence official, laid out this possible program in his remarks:

If North Korea can…

Completely shut down all nuclear facilities;
Eventually hand over a comprehensive declaration of its nuclear and ballistic missiles, as well as its chemical and biological programs;
Accept U.S. and international experts and provide access to its WMD facilities;
Agree to set a timeline and work with the United States and international experts to dismantle and remove its nuclear weapons, missiles, facilities and associated material from Korea;
Agree to rejoin the Non-Proliferation Treaty;
Reform its foreign investment rules and regulation to make investment a friendly environment for the international community;
Improve its human rights record

…then US can offer…

Economic Incentives:
The United States would be able to provide humanitarian assistance to North Korea;
It could ease restrictions on North Korean banking transactions;
It could modify or ease existing import and export gaps;
It could provide exemptions for joint ventures to be implemented in economic zones.

Political Incentives:
The United States could lift its travel ban;
It could establish a liaison office;
It could start promoting cultural exchanges;
It could lift the U.S. sanctions on Kim family members and senior officials;
It could delist North Korea as a state sponsor of terrorism.

Security Incentives:
The United States could sign an End-of-War declaration;
It could begin military-to-military engagement;
It could sign a Peace treaty;
It could establish a diplomatic relationship.

And for the last step:
The United States could lift U.N. sanctions.