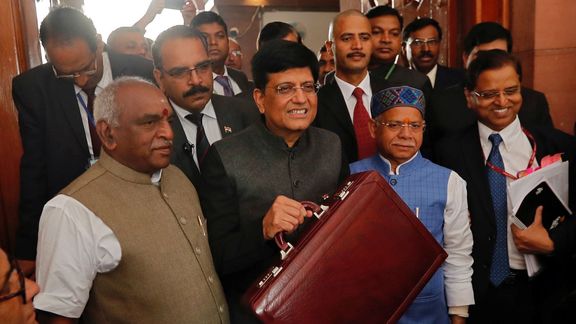 Faced with a general election in weeks from now— and the scars of recent defeats in major state legislative polls yet to heal—it sought to woo both farmers and the salaried class.

Interim finance minister Piyush Goyal splurged to keep these two sets of people happy and, in the process, may have given a pass to the government’s fiscal deficit target.

Here are some of the highlights of the budget:

1. PM Kisan Samman Nidhi: The scheme assures a direct cash transfer of Rs6,000 per year to marginal farmers, who own less than 2 hectares (5 acres) of cultivable land. It will benefit 120 million farmers, according to Goyal. The cash transfers, to be funded wholly by the central government, will be implemented retrospectively from December 2018.

2. Fiscal deficit: Despite the sops and pre-poll largesse, the fiscal deficit—the value of the government’s expenditures over revenues—slipped only a tad. While it initially sought to rein in the deficit at 3.3% of the GDP this financial year, Goyal, today, announced a revision to 3.4%: “Excluding the impact of income support for farmers, the fiscal deficit would have been less than 3.3% of GDP.”

3. MGNREGA allocation: The budget allocation to the previous Manmohan Singh-led government’s flagship rural employment programme will be Rs60,000 crore in fiscal year 2020. Last year’s budget had allocated Rs55,000 crore for the year 2018-19. However, supplementary grants of around Rs6,084 crore were given in the course of the year. This translates into a dip in the overall allocation but Goyal said, “additional amount would be provided if required.”

4. Renewable energy: The government asserted its commitment to renewable by highlighting the International Solar Alliance, the first such international organisation based in India. Goyal stressed that India’s installed solar power capacity has grown over ten-fold in past five years. The government is also committed to the cause of electric vehicles. “India will lead the world in the transport revolution through electric vehicles and energy storage devices, bringing down import dependence and ensuring energy security,” said Goyal.

5. Simplification of direct taxes: In two years, all verifications and scrutiny of income-tax returns will be automated and all returns will be processed in 24 hours. This will be done through an “anonymised back office.” The move seeks to ease the process of filing I-T returns for the middle class.

6. Higher exemption limit on income-tax slabs: There won’t be any income tax on people earning taxable incomes up to Rs5 lakh. This is a doubling of the prevailing exemption limit. The standard deduction has also been raised to Rs50,000 from Rs40,000.

It aims to provide a monthly pension of Rs3,000 after an individual is 60 years old, provided they were contributing Rs100 per month till they reach the senior citizen age. For this, the government has set aside a sum of Rs500 crore.

8. Bank cleanup: The ballooning bad loans in the Indian banks has been a key concern for the Modi government which has been addressed with the help of new bankruptcy code in effect since 2016. Banks have already managed to recover close to Rs3 lakh crore with the help of it.

In order to help the ailing public sector banks, the government has also pumped in Rs2.6 lakh crore.

9. Defence: In order to strengthen India’s borders, the government is ready to spend over Rs3 lakh crore in 2019-20, the highest ever. Additional funds will also be provided if necessary, said Goyal.

10. Sanitation: The government announced that India has achieved 98% rural sanitation coverage and up to 5.45 lakh villages have been declared as “open defecation-free.”

11. Infrastructure: The government had decided to pump in Rs64,587 crore into Indian Railways, one of the world’s biggest employers. Interestingly, the railways also had its safest year in history. India has also been hailed as the world’s fastest highway developer with 27 kms of highways built each day.

12. Digital India: The rise in mobile data usage is seen as a shift towards digital India. Now, India is leading the world in consumption of mobile data which has increased by over 50 times in the last five years, said Goyal. The number of mobile part companies has also grown from merely two to 268. Also, the government now plans to build about 100,000 digital villages in the next five years, which are self-sustaining units. Typically, these have data and voice connectivity and are equipped with solar panels, etc.