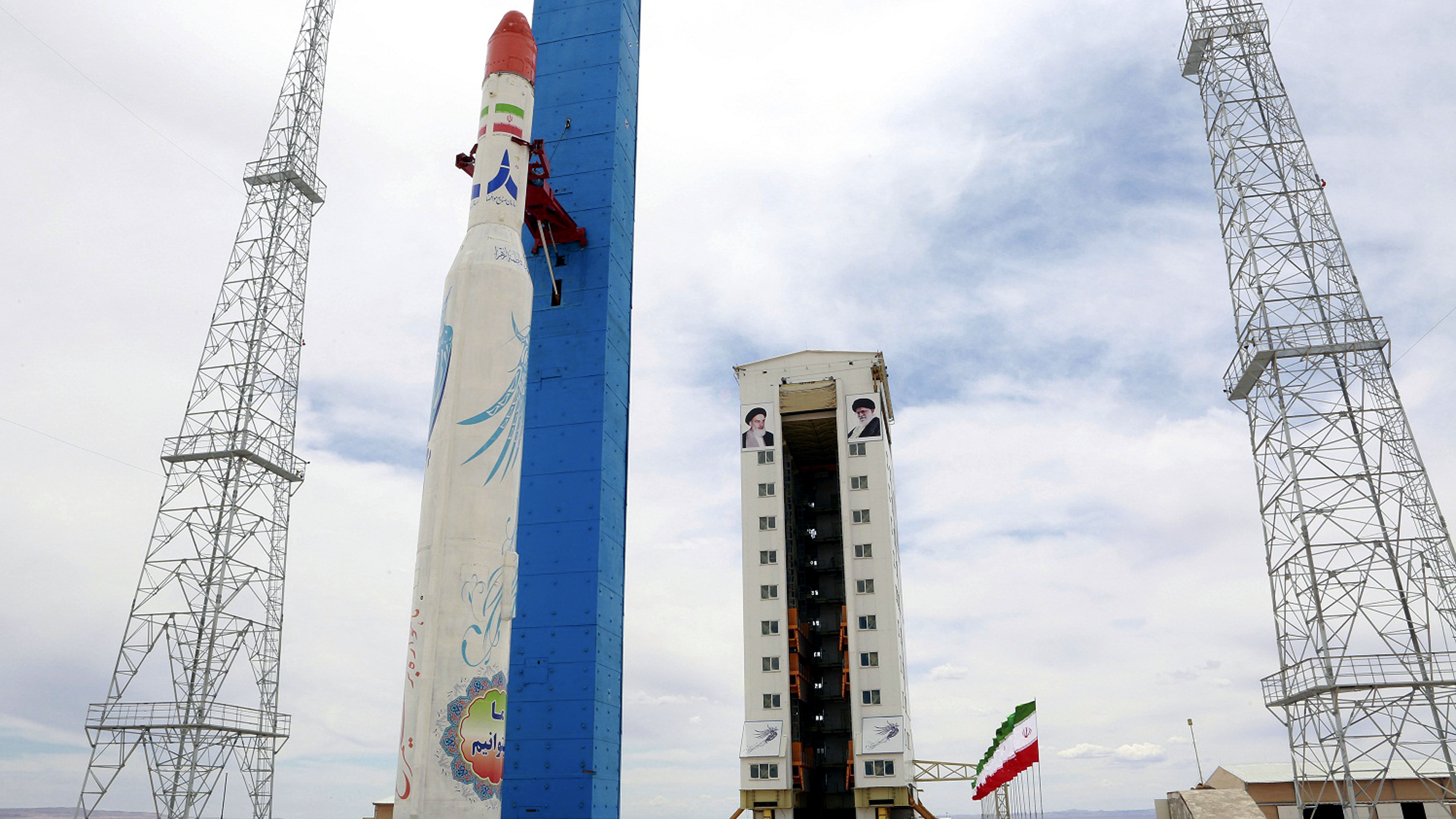 An Iranian satellite launch failed yesterday after its rocket left the atmosphere, Tehran said after launching the spacecraft despite criticism from the United States.

It is the first of two satellites Iranian leaders said they were planning to launch. The second satellite is “waiting for orbit,” per Iran’s telecommunications minister.

Experts had expected the flights to take place sometime in the first eleven days of February, as Iran celebrates a national holiday linked to the 40th anniversary of the Islamic revolution in 1979.

The Trump administration exaggerated the threat of those satellite launches, according to independent experts and US intelligence officials, as it pushes for new sanctions against the country its top diplomat says is the world’s “common enemy.”

US Secretary of State Mike Pompeo had called on Iran to cancel the launch, saying that it would “incorporate technology that is virtually identical to that used in ballistic missiles, including in intercontinental ballistic-missiles (ICBMs). An ICBM with a range of 10,000 km could reach the United States.” (That’s equivalent to more than 6,000 miles.)

Experts say this seriously overstates the meaning of the launches, which use a rocket called Simorgh. Named for a bird from Persian myth, it is less than half the size of the privately-built Falcon 9 rocket that launches most satellites in the US. (The Simorgh is 27 meters tall, or about 88 feet.) Iran launched its first satellite in 2009 with a smaller rocket called the Safir.

While the technology in satellite-launching rockets and ballistic missiles overlap, the Simorgh is not “virtually identical” to a ballistic missile, and it would not be able to deliver a weapon to the United States.

“Does Iran have an ICBM capability? They do not,” the director of the US Defense Intelligence Agency, general Mike Ashley, told Congress in March 2018 when asked about the Simorgh, which he presciently characterized as an unreliable vehicle. “Could they take that space-launch vehicle and start working that toward an ICBM capability? They could, but that is many years out.”

“The technologies that the Iranians are working on in their Safir and Simorgh rockets are not suitable or are not preferred for missiles,” says Jeffrey Lewis, an arms control expert who leads non-proliferation work at the Middlebury Institute of International Studies, a graduate school in Monterey, California.

His team has used commercial satellite imagery produced by Planet, a California company, to confirm Iran’s claims about its satellite launch plans. The images show evidence of recent activity at Iran’s Semnan Space Center, including vehicle tracks, the delivery of a large container thought to hold the rocket, and the erection of two launch pads.

The fact that this lengthy preparation—which requires ground infrastructure to slowly fuel the rockets with liquid propellants—is so easily observed shows how unsuitable the vehicle is for launching missile attacks against other countries.

“These are rockets that need to be erected with a crane at a launch pad and need to be fueled,” Lewis says. “When North Korea went and built an ICBM, they built it with a different engine because they wanted it to be mobile.”

In the case of the space launch, Markus Schiller, a private analyst based in Germany, told NPR that “Iran always claims that they don’t want to build an ICBM but they want to pursue a space program. That’s what I’m seeing right now.”

The ICBMs developed by North Korea run on solid fuel, so they can be transported and launched by hidden vehicles. Otherwise, the US could spot them and attack them before they launch. The North Korean threat has the US scrambling to develop more reliable and constant radar surveillance.

Iran says it will not build any ballistic missiles with a range of more than 2,000 kilometers, though it maintains an extensive arsenal of shorter-range missiles and continues to test about 40 to 50 each year. Iran has been caught providing missile components to Houthi rebels fighting in Yemen, just as US has provided weapons to the other side of that conflict, Saudi Arabia.

In 2017, the last time Iran launched a Simorgh rocket, France, Germany and the United Kingdom joined the US in condemning the action. They saw it as violating the spirit of the UN Security Council resolution adopted after Iran made an agreement with the US, Europe, Russia and China to halt its nuclear program, known as the Joint Comprehensive Plan of Action (JCPOA).

Technically, however, launching space vehicles isn’t against the UN resolution, which calls on Iran to not develop ballistic missile technology. And since that last launch, the US unilaterally withdrew from the nuclear agreement underlying that resolution and re-implemented its sanctions, leaving the remaining partners struggling to prop up the deal, which Iran so far has continued to abide by.

In Feb. 2018, months before Trump killed the nuclear deal with Iran, an unclassified assessment (pdf) released by the Director of National Intelligence noted the nuclear deal had extended the amount of time Iran would need to make an atomic weapon from “from a few months to about one year.”

The French foreign ministry has called on Iran to call off the space launch, but Pompeo has gone further, threatening Iran with “deeper economic and diplomatic isolation.” Rolling out the kind of global sanctions that led to the nuclear agreement in the first place will be hard to achieve now, though, given the raft of other trade and foreign disputes the US currently has with allies and rivals alike.

“Nations are rallying to our side to confront the regime like never before,” Pompeo said in Cairo last week. “Egypt, Oman, Kuwait, and Jordan have all been instrumental in thwarting Iran’s efforts to evade sanctions.”

But rallying regional autocrats who are rivals with Iran may prove easier than winning over democracies in the court of public opinion, much less Russia and China.

The road to an ICBM

For Iran to develop a missile capable of delivering a nuclear weapon thousands of kilometers and threatening the US, it would need a far more powerful rocket booster and a warhead capable of preventing the weapon from burning up as it returns to the atmosphere from space.

Iran is suspected to have such plans, at least in dormancy. Last year, satellite imagery showed evidence that Iran has been testing solid rocket boosters that would outstrip that restriction. The organization that builds the Simorgh rocket, Shahid Hemmat Industrial Group, has been sanctioned for work with North Korea on the engine that powers its Hawasong-15 ICBM.

“If the Iranians were to trot out one of those, then Mike Pompeo would have a point,” Lewis says. When it comes to new solid rocket boosters, he says “that makes a pretty good ICBM…unlike the Simorgh, that technology is much more readily transferable.”

By instead presenting a peaceful technology that falls into a grey area, Iran is legally pushing the limits on its agreement, attempting to gain prestige by demonstrating technical chops—and baiting the US.

“Iran has a habit of exploiting dual-use technology,” says Behnam Ben Taleblu, an Iran analyst at the Foundation for Defense of Democracies, a think-tank with an anti-Iran bent, referring to technology that can be used for civilian or military purposes.

He expects Pompeo to use any satellite launch as a predicate to push for renewed European sanctions at a Middle East-focused policy conference the US and Poland, widely seen as sliding into authoritarianism, are hosting Feb. 13-14.

The 9 Victims of the Helicopter Crash That Killed Kobe Bryant