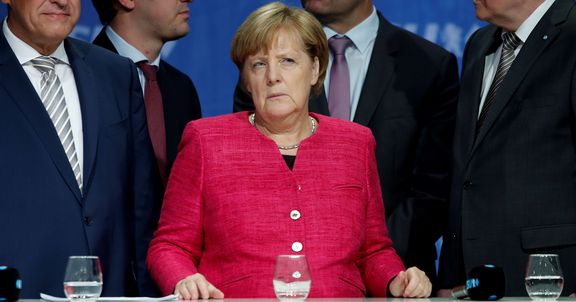 Angela Merkel’s sudden announcement this week that she would step aside as leader of the Christian Democrats, and would not seek reelection as chancellor again in 2021, sent shock waves around Germany and Europe. Even though the chancellor had not been expected to run again after her fourth term ended, that didn’t stop the media from pulling out all the stops with wistful “end of an era” headlines and pictures of a solitary Merkel.

By not running again for leadership of the Christian Democratic Union, Merkel has made a bold move to try and reboot the party, which has been battered in the general election and two recent state elections. As part of a coalition in Berlin together with the Christian Social Union and the Social Democrats, Merkel has been hamstrung by months of in-fighting—and voters used the state elections to punish Berlin for it.

Merkel’s position as chancellor right now, however, is by no means as secure, at a time when the EU is battling with an identity crisis, Brexit, Italy’s budget woes, and the growth of right-wing parties. The person chosen to lead the CDU at the party congress in December may make the difference between whether Merkel is able to rule on as chancellor to the end of 2021, or whether she ends up being pushed out.

Merkel’s ally Annegret Kramp-Karrenbauer is up for the job, but so are health minister Jens Spahn and her old rival Friedrich Merz. Merkel ousted Merz from his position as parliamentary floor leader in 2002 in a bid to consolidate power. Right now, he is the current favorite to take over the CDU leadership, saying this week that the party needs “a new direction.” Political commentators believe that with Merz in control of the party, her position as chancellor would become untenable.

The other thing that could bring Merkel’s reign to a premature end is if the SPD party, which has been the biggest loser in recent regional elections, finally pulls out of the wobbly coalition government. This would trigger fresh elections and plunge Germany back into uncertainty.

Carsten Brzeski, chief economist at ING Germany, says that apart from the SPD pulling out of the coalition, there isn’t really another likely scenario that would stop Merkel from staying on till the end of her term, unless “the CSU goes completely wild and leaves the coalition.” Another potential scenario would be “Merkel stepping down after another year of disastrous regional elections and a party which thinks that the successor to Merkel is already up for the job.”

Bundestag president Wolfgang Schäuble told Deutsche Welle that he doesn’t believe Merkel is a lame duck. “Once elected as chancellor, you can only be thrown out without your own agreement if there is a majority in parliament who elects another chancellor. That’s unthinkable in this parliament. So her position is constitutionally strong.”

He views Merkel’s loss of popularity at home as a symptom of a “tectonic change” happening across the EU and in democracy itself. “Our Western system of democracy, the rule of law, parliamentarianism, is under stress,” Schäuble said.

While it’s tempting to already start mourning the loss of a chancellor who has been one of Europe’s strongest, steadiest, and longest-serving leaders, Merkel is not gone yet. Her demise has been predicted numerous times over the past 13 years. Any speculation that she won’t last until 2021 needs to take into account how skilled she is at holding onto power.